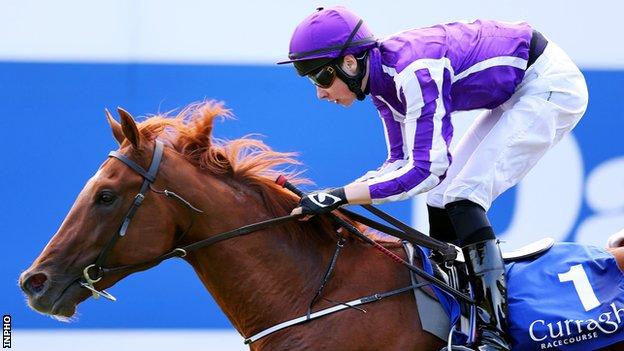 Epsom Derby winner and 1-8 favourite Australia eased to a straightforward victory in Saturday's Irish Derby at the Curragh to give trainer Aidan O'Brien his 11th win in the race.

Kingfisher and Orchestra gave the Ballydoyle stable a 1-2-3.

It was the fifth time O'Brien has had a clean sweep of the places.

Australia, ridden by the trainer's son Joseph O'Brien, is a son of 2001 Derby winner Galileo and 2004 Epsom Oaks victor Ouija Board.

"It was an armchair ride. I just had to make sure I didn't fall off," said jockey O'Brien after riding his fifth winner in an Irish classic.

"We still haven't seen the best of this horse."

O'Brien, riding his second Irish Derby winner, sat in third place as Kingfisher and Orchestra made the running.

He made his move on Australia in the straight before leading a furlong out and going on to win by two and a half lengths.

Australia was sent off at a highly prohibitive price after the race was reduced to just five runners with the late withdrawals of Epsom runner-up Kingston Hill and the winner's stablemate, Geoffrey Chaucer.