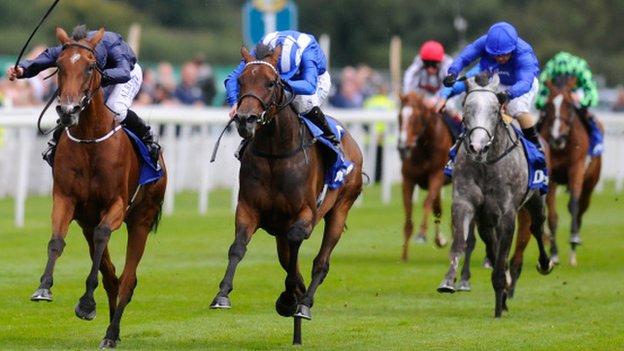 Tapestry has been added to the line-up for the Prix de l'Arc de Triomphe at Longchamp on Sunday.

Tapestry was supplemented as a late entry at a cost of 120,000 euros (£95,000) after beating Arc favourite Taghrooda to win the Yorkshire Oaks.

A maximum field of 20 runners is set to contest the mile-and-a-quarter race which has a first prize of nearly £2.4m.

Despite her defeat at York, jockey Paul Hanagan believes Taghrooda is a worthy favourite.

"She won't shy from anything really, she can hold her own," he told At The Races.

"She's a big filly, she rides kind of like a colt so that (a big field) wouldn't worry me."

Some 5,000 Japanese racing fans are expected at the Paris track to cheer on their contenders as Harp Star, Gold Ship and Just A Way seek to become the first Arc winner trained in Japan.

Ruler Of The World is one of three runners for Irish trainer O'Brien, whose son Joseph will be aboard Chicquita.

Aside from Taghrooda, for John Gosden, there are two other British-trained contenders.

Derby runner-up and St Leger winner Kingston Hill represents Roger Varian, while Al Kazeem runs for Roger Charlton having been returned to training earlier in the year after his stud career was halted by fertility issues.