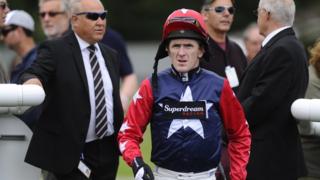 AP McCoy says his target for the 2014 season is a 20th consecutive champion jockey title and dismisses any notion of imminent retirement after making his best-ever start to a season.

The 40-year-old spoke to BBC Sport NI's Thomas Niblock on a return to his former school, St Benedict's Randalstown, for their prize-giving day.

McCoy admits school was not a priority for him as he focused on pursuing a career as a jockey from a young age.

Watch: UK Championship - Wilson one frame from victory against Maflin