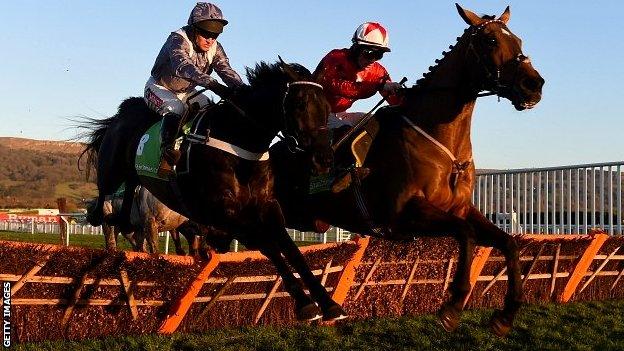 The New One made it three wins in as many starts this term with victory in the International Hurdle at Cheltenham.

Early leader Zamdy Man was reeled in by The New One and Vaniteux, with Sam Twiston-Davies's charge going on to win by four-and-a-half-lengths.

"He's excellent," said jockey Twiston-Davies, son of trainer Nigel. "Coming into the race, we had to win it to become a Champion Hurdle contender.

"He wasn't flashy, but when he comes to the track he does what he needs to."

The New One's stablemate Mad Moose was set for his first outing in over a year after being banned for refusing to race on numerous occasions, but the veteran once again dug his heels in at the start and took no part.

The 16-1 shot, trained by Venetia Williams, defied a hike in the weights to beat Barrakilla by six lengths.

"Every time you come to an obstacle he makes you look good - I'm not doing anything but sitting on him," Coleman told Channel 4 Racing.

"He's bull ignorant and not the most mannerly of horses, but he has the heart of a lion."