Aintree is expecting dry, warm weather as its three-day Grand National meeting starts on Thursday - with a hint of history in the air.

Retiring 19-time champion jockey AP McCoy is riding at the meeting for the final time and will be on Holywell in the Betfred Bowl.

He also rides Jezki as the horse takes on fellow former champion hurdler Rock On Ruby and this year's Cheltenham runner-up Arctic Fire in the Aintree Hurdle.

The first action over the National fences sees amateur jockeys compete in the Fox Hunters' Chase.

Sam Waley-Cohen rides leading contender Warne with the jockey looking to add to his fine record of five career wins over the big obstacles.

What is AP McCoy riding?

The Northern Irishman will ride in the Grand National for a record 20th - and final - time on Saturday, with favourite Shutthefrontdoor his expected mount.

McCoy, 40, has indicated he will quit there and then if he wins the National, with Sandown on 25 April his alternative final day.

He has been leading jockey at the meeting seven times (the last in 2010) and has six rides booked for the opening day.

On the eve of the meeting, a giant image of McCoy was beamed on to Liverpool's Royal Liver Building. 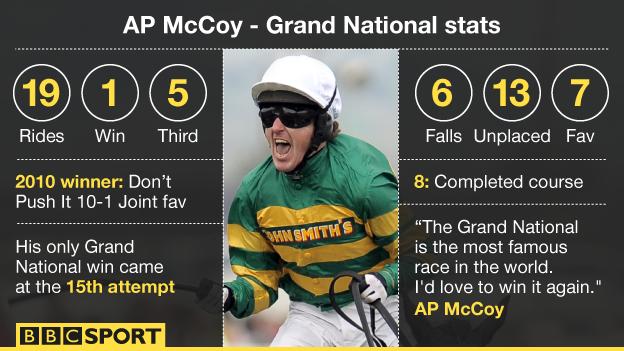 The going on the National and hurdle tracks at the Merseyside track is described as Good to Soft. The Mildmay is Good to Soft, Good in places.

BBC Radio 5 live weather forecaster Simon King said: "It's going to be a cracking start to the Grand National meeting with racing taking place under sunny skies, light winds and a temperature reaching around 18C.

"The big change will come on Grand National Day; with a stronger wind, it will feel much cooler with a maximum temperature only reaching 10C. There could be a few showers during the morning, but by the afternoon it should be dry and sunny."

Latest on the Grand National

The final field was announced on Thursday morning, with the maximum of 40 horses set to take part in Saturday's race.

Punters will be keeping a keen eye on the weather, with drying ground thought to suit some contenders including last year's runner-up Balthazar King (12-1) and Cause Of Causes (20-1).

Safety in the spotlight

The National meeting attracts opposition from animal rights campaigners who believe it is cruel.

Aintree made significant changes to the National course after two horses were fatally injured in both the 2011 and 2012 runnings.

The race has been shortened slightly, and some alterations made to the take-off and landings near fences, but perhaps the most significant change has been the use of more forgiving plastic (rather than wooden) cores for the fences.

Jump racing is a dangerous sport, although there were no serious equine injuries in any race at the 2014 meeting, and no horses have died in the last two Grand Nationals.