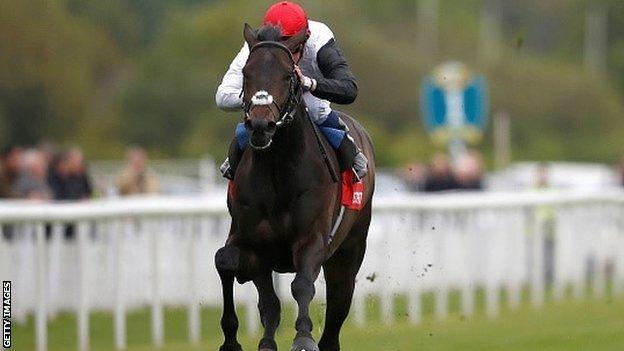 Trainer John Gosden had a 1-2 in the Dante Stakes at York as Golden Horn beat stablemate Jack Hobbs, with Elm Park third.

The 4-1 victor, under William Buick, claimed a two-and-three-quarter-length win from his better-fancied stablemate in what is a top Epsom Derby trial.

Golden Horn is not currently entered for the Classic on 6 June, but could be supplemented for a £75,000 fee.

Gosden said it would be down to owner Anthony Oppenheimer whether the horse runs in the mile-and-a-half Epsom race.

"He's been very firm with me that he's a mile-and-a-quarter horse and he told me that all along, so we will see," said the Newmarket trainer.

Golden Horn was quoted by bookmakers as 6-4 favourite for the Derby, with a run, with other leading contenders including Zawraq (5-1), trained by Dermot Weld.