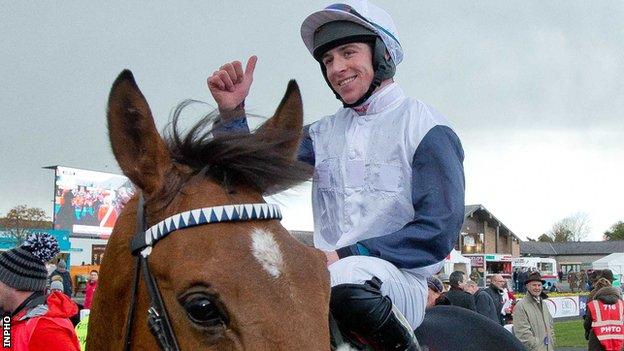 One Track Mind claimed Grade One glory for Warren Greatrex and Gavin Sheehan with victory in Thursday's Champion Stayers Hurdle at Punchestown.

One Track Mind (10-1) was never too far off the pace and Sheehan set sail for home before the final bend.

Admirable mare Jennies Jewel was second while Shaneshill fell at the final flight under Ruby Walsh.

One Track Mind galloped all the way to the line to take the prize by two and a quarter lengths.

Successful trainer Greatrex said: "This race was the plan for most of the season.

"He is a brilliant jumper and will go chasing next season I would have thought.

"When he went to challenge a fair way out, I knew we were in business."

Douvan finished his excellent season in style with victory in the Ryanair Novice Chase.

The six-year-old, under Ruby Walsh, went off the 2-9 favourite, led from the first fence and never looked troubled.

"What an outstanding future prospect Douvan looks for the two-mile championship division, in which Sprinter Sacre has excelled over the past few months since his return from the wilderness.

"The winner was completely imperious here as he led from start to finish, and if anyone says he put a foot wrong, well they're being pretty picky.

"When asked what they thought of the challenge Douvan would provide next season, a member of the 'Sprinter' entourage simply grimaced and walked away.

"This is a very special horse - and he's only six."