Jockey Sophie Ralston says a major gamble has paid off - after she wrote an impassioned letter calling for racehorse trainers to take a chance on her.

When the unconventional plea was initially published by the Racing Post, the first online reply was 'Who?'

"That was so funny. I'm not a 'name' and sometimes with racing it is who you know, not what you know. If my mum or dad was a trainer, of course that would be a huge help," the 26-year-old Irish rider tells BBC Sport.

But less than a week later, she has received two job offers and has been called up to ride for two different trainers.

"Even if I got just one extra ride the whole thing would have been worth it," said Ralston, who once made an 860-mile round trip for a single race. Her mount lost.

After trying a different tack, the jockey now has one suitor from South Africa, another from Scotland, and has her first rides for two trainers at Wolverhampton on Friday and Monday.

What made her act?

Ralston does not hail from a horsey background but volunteered to help out at a local riding school aged 11 in return for lessons.

She soon set her sights on becoming a jockey, took part in pony racing, graduated from the Irish Racing Apprentice School and moved to England where she is now a professional who has been supported for several years by Epsom trainer Pat Phelan.

Despite coming out on top last year in a series of races for apprentice jockeys, she felt frustrated by a recent lack of bookings and decided to put her own case forward in a letter that compares her fortunes with those in other sports.

"If I went out on the golf course with Rory McIlroy, played 18 holes in front of a large paying crowd and beat him, what would happen, I wonder?" her letter began.

"If I beat Roger Federer in a tennis match at Wimbledon, would people be interested?

"If my bike was in a photo finish with Chris Froome's as we crossed the line, would I perhaps be invited onto popular TV shows?"

Her point being that she has finished ahead of the champions in her field - revered riders like Ryan Moore and Silvestre de Sousa. Not every day, not throughout a season... but enough, she believes, to deserve more opportunities.

"Racing is unique in that inexperienced jockeys can compete on equal terms with very successful ones. But what is a successful jockey? One who wins lots of races," said Ralston, who has 14 wins from 212 rides in six years.

"I could win lots of races too if I were given better opportunities. I know I could make the odd mistake, but there isn't a jockey out there who never makes one.

"Trainers, you're allowed to gamble. Take a chance on me."

Not everyone thought it was a good idea...

Ralston has been based for several years with Phelan at the historic Ermyn Lodge stables, which sent out the 1971 Grand National winner Specify.

A trip to see some friends in Cyprus just before Christmas turned into a working holiday where she had four rides in one afternoon, and the owners have offered to pay for her flights if she returns.

"We were just talking about how well our trainer - who has supported me - was doing and the elephant in the room was that I wasn't riding any of those winners," she said.

"I decided to write the letter and didn't think it would be published. I know I still have to prove myself but I just think I haven't been discovered yet." 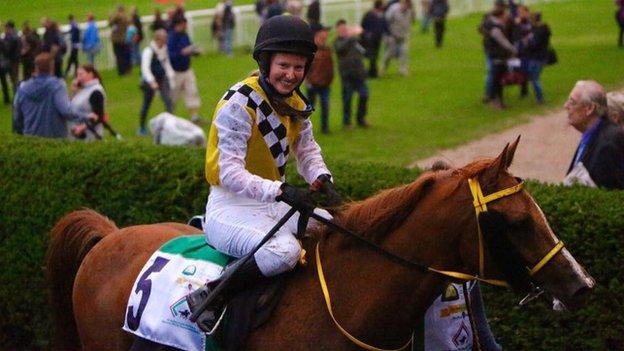 Her letter came as a surprise to some, including Phelan who was not aware she had written it.

"It did seem like a cry for help. I did feel badly for her that she had to do it," said Phelan, a former top showjumper and commandant (major) in the Irish Army.

He has about 20 horses as a salaried trainer - his wages, and that of Ralston and apprentice rider Paddy Bradley, are paid by landlord Tony Smith.

"It is great to see someone who has had 14 winners but still retains the enthusiasm - she will travel any place for a ride, even if it costs her £50 in petrol and she's out of pocket," he said.

"Sophie is a clever girl with a big smile but, unfortunately, she is a professional sportswoman in a hugely competitive sport."

Race riding can be a complex business and a power-packed display may be required on some occasions, while more finesse is required in others.

"She is perhaps not as physically strong as some other jockeys but as we say in racing, some horses do run for her," added Phelan. "Will her letter mean she gets more rides? I honestly don't know."

But there have been dividends already. Ralston rides Sporty Yankee in the 6:15 at Wolverhampton on Friday after trainer Aytach Sadik saw her letter.

And owner Helen Adams and trainer Heather Main have booked her to ride Good Tyne Girl at the same all-weather track on Monday.

Agent Russ James arranges rides for Ralston and 23 other jockeys and believes her balance can be a particular asset on all-weather racing tracks.

"She rides really well, and will go anywhere. I remember her travelling to Musselburgh in Scotland from Epsom, which is 430 miles and takes seven and a half hours," he said.

"I wasn't sure about the letter because you don't want sympathy, you want a fair crack of the whip.

"Is she likely to be champion jockey? No. But she's got the work ethic of three jockeys."