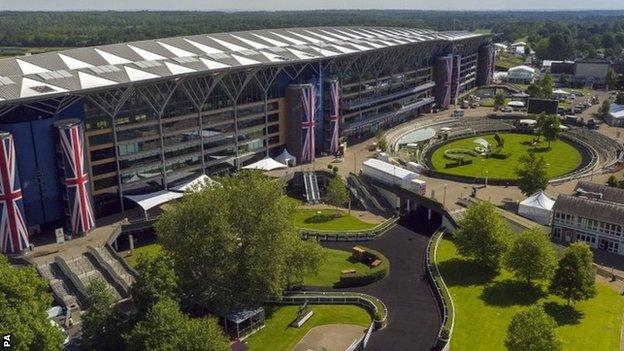 With its rich history, pageantry and famously strict dress code alongside the horse racing, Royal Ascot is one of British sport's best known and most colourful events, with the Queen at the centre of proceedings.

In 2019, some of the world's top racing figures, equine and human, will once again compete in 30 races staged during the Tuesday to Saturday fixture, all looking for a slice of the prestige and the £7.3m of prize money on offer.

Here's some of the potential headline-makers...

As has been the case for nearly two centuries, a colourful procession of open-top carriages along the racecourse will signal the arrival each day of the Queen and other members of the royal party.

Her Majesty, probably the longest standing racehorse breeder and owner in the world, has been attending since the fixture resumed in 1946 after a break during the Second World War.

She has seen her silks carried to victory in 23 races at the fixture - the first time in 1953, but perhaps the most famous was Estimate in the 2013 Gold Cup. In 2019, Magnetic Charm will not be without a chance when racing on day four.

Because of industrial action on South West Trains over guards, a reduced rail service is expected during the week.

A significant portion of the 300,000 people who attend travel by train and the racecourse is planning to open extra car parks to cope but is warning of inevitable congestion.

It's better however than 1955 when the whole fixture was postponed until July because of a strike on the railways.

Royal Ascot's leading current jockey, with 60 successes, Frankie Dettori describes the prolific Stradivarius - the 'people's favourite' - as his top mount of the week who's "ready for it" as rivals circle around intent on wrestling away the Gold Cup that he won in stirring style in 2018.

The John Gosden-trained five-year-old, bred and owned by financier Bjorn Neilsen, is undefeated in his last six races, landing a £1m bonus in the process.

But he's facing some stiff opposition in the day three feature, notably from Cross Counter - the first Melbourne Cup winner trained in Britain - and the tigerish Dee Ex Bee.

Yeats, a four-time winner between 2006 and 2009 was the last horse to record back-to-back victories. If the popular Accidental Agent duplicated his 2018 win in the opening Queen Anne Stakes, he would be the first to repeat the achievement since 1907.

The biggest training names including Sir Michael Stoute, Aidan O'Brien and Godolphin's Charlie Appleby - whose 2018 Derby winner Masar is due to return to action for the first time since Epsom in Saturday's Hardwicke Stakes - are likely to dominate as usual, but on day one they may have to concede the limelight to Charlie Hills.

Hills, son of the former trainer Barry, saddles his two stable stars - last year's runner-up Battaash and Phoenix Of Spain, the Irish 2000 Guineas winner - within 40 minutes of each other, in the King's Stand Stakes and the St James's Palace Stakes respectively.

The trainer admits expectations revolving around having such a well-known racing 'pedigree' - his late brother John was also a trainer and brothers Richard and Michael are retired top-flight jockeys - have made things "hard" on occasions, and numbers at his Lambourn stables have been down, but he's hopeful of silencing any sceptics.

When the Jeremy Noseda-trained Cenotaph lines-up in the Wokingham Handicap, he will be his trainer's final runner in a career of more than 20 years.

Though he won't rule out one day returning to the fold, Noseda - the winner of nine Royal Ascot races - has said that "the time is right for me to walk away…with a smile on my face".

Hopes that the promising two-year-old Bombproof would race this week were dashed by a 'setback'.

As number one rider to the Coolmore racing empire and its powerful main trainer Aidan O'Brien, Ryan Moore is favourite to be top jockey during the week for the sixth year running, and ninth time in all.

At his favourite track, Dettori is sure to be amongst the winners too, but few riders have a better list of mounts than James Doyle.

In many ways, it was at Royal Ascot that 'the Doyler' first announced his appearance in the big time when taking three prizes in a row on the Wednesday afternoon in 2013.

Now one of two main jockeys for Sheikh Mohammed's Godolphin operation in Europe, he will be extra busy this time because the other principal rider, William Buick, is absent through injury.

Highest on Doyle's list will be the sheikh's Masar in Saturday's Hardwicke Stakes and the William Haggas-trained Sea Of Class, the narrowly-beaten Prix de l'Arc de Triomphe runner-up, in the day two feature, the Prince of Wales's Stakes.

The gap in the records…

In a sport where women participants have achieved a lot more than their counterparts in other disciplines, it's a particular disappointment that only once has a female rider guided her mount into the Royal Ascot winners' circle.

And that was as long ago as 1987 when Gay Kellaway celebrated success on Sprowston Boy in the Queen Alexandra Stakes, the traditional closing race on the final day.

Though, in recent years, former champion apprentices Hayley Turner and Josephine Gordon have come close to success, the winless run is a notable hole in the 'CV' of female jockeys, and contrasts markedly with the Cheltenham Festival over jumps where women have thrived.

Hollie Doyle, Nicola Currie and Hayley Turner are all scheduled to be in action, and if history is to be made at last it could be that Doyle and Nate The Grate, who's likely to relish the longer distance over which he's asked to race in Wednesday's mile-and-three-quarter Queen's Vase, is the one.

Although Wesley Ward will bring a string of hopefuls across the Atlantic from the United States, overseas raiders - notably from Australia - are not as numerous as sometimes they were.

The days of brilliant Aussie sprinters like Choisir, Takeover Target and Black Caviar rolling in year in, year out are currently a thing of the past, and the Kerrin McEvoy-ridden Houtzen (King's Stand Stakes) will be the sole contender from Down Under in 2019.

Various theories have been put forward for this change, ranging from lower prize money levels in the UK to the tightening of drugs rules.

New Zealand will be represented at Royal Ascot for only the second time when Enzo's Lad lines up in the King's Stand Stakes, while the participation of Japan's Deirdre in the Prince of Wales's Stakes has led to officials taking the unusual step of altering the race-time to 3-40 to ensure fans in her home country can cheer her on before the clock there strikes midnight - it'll be 11-40pm.

The 300,000 visitors expected during Royal Ascot will be hoping recent wet weather has reached its own finishing line.

Forecasters are still tipping the possibility of a mixed start to the five days, but then a steady improvement from day three - Ladies' Day.

Average rainfall for Ascot in the whole of June is 45mm, but in the 10 days leading up to the 2019 fixture 84mm has fallen, so after two years of good to firm ground conditions, a first-day description of good, good to soft in places is anticipated.