Tiger Roll will attempt to win a record third successive Grand National at Aintree on 4 April, the owner's racing manager has confirmed.

But there were doubts the 10-year-old would compete in 2020 after being given top weight.

"We have decided that Tiger Roll will definitely run in the Grand National," Eddie O'Leary told the Racing Post.

"Provided everything goes OK on his return to action at Navan on Sunday, and in the cross country at Cheltenham next month."

The 2018 and 2019 winner, trained by Gordon Elliott, has been given 11st 10lb, alongside stablemate Delta Work.

Tiger Roll would be the first horse since Red Rum in 1974 to win off top weight.

He has not run since last year's National, when he won by two and three quarter lengths from mare Magic Of Light, who at 10st 12lb is 4lb better off this time comparatively with the 2019 victor.

Tiger Roll is expected to have a similar preparation this time, with Sunday's Boyne Hurdle at Navan, followed by the Cross-Country Chase next month where he would be seeking a fifth Cheltenham Festival win.

I'm not sure this was ever in much doubt, but after the harrumphing about Tiger Roll's weight, it is good to have solid confirmation.

Of course, he may not match Red Rum and achieve Aintree immortality, but it is huge for the event and for the sport that there is even another horse that can have a go.

I keep on saying it, but it is true: you need to be into middle age now to have any sort of image in your mind of Red Rum racing. A modern day Grand National icon would be terrific. 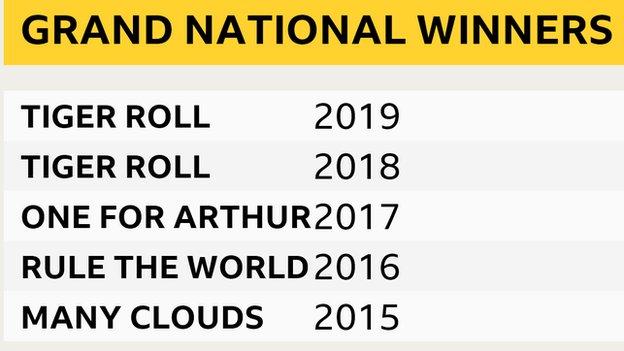