Battaash battered his rivals with a brilliant burst of speed to triumph as Royal Ascot began behind closed doors.

The 5-6 favourite, part of a treble for jockey Jim Crowley, cruised to victory in the King's Stand Stakes after finishing runner-up in 2018 and 2019.

It was a one-two for trainer Charlie Hills with stablemate Equilateral second. Liberty Beach finished third.

Circus Maximus, under Ryan Moore, won the Queen Anne Stakes in a photo finish from Frankie Dettori aboard Terebellum.

Dettori had reason to celebrate later with victory on Frankly Darling in the Ribblesdale Stakes, while 18-1 chance Pyledriver landed the King Edward VII Stakes.

The meeting is taking place without spectators and with strict safety protocols because of the coronavirus pandemic, while the Queen is missing the fixture for the first time in her 68-year reign.

So it was to an eerie silence that Crowley won the opening Buckingham Palace Handicap on Motakhayyel for trainer Richard Hannon.

But the rider was smiling behind his face mask, and after Battaash took the Group One sprint, he followed up with victory on Nazeef to complete a 118-1 treble.

'I had two or three espressos to get me going' - Dettori

Ascot, which normally welcomes a total of 280,000 spectators to the five-day meeting, limited numbers to jockeys, trainers, officials and a small number of media representatives.

It made for a surreal atmosphere and even the usually exuberant Dettori admitted it took some getting used to.

"For the first race it was hard to pick myself up. I'm usually signing autographs with people slapping you on the back and shouting my name. Today I had to have two or three espressos just to get me going for the first race," he said.

"In the second I had a good battle with Ryan (Moore), so I was well warmed up and it's nice to get one on the board, particularly for my boss John Gosden, who is an amazing trainer.

"The racing is magnificent. Of course we miss the crowd, but we're providing a good show for the people at home."

Victory for Frankly Darling, a daughter of the legendary Frankel, was a 50th at Royal Ascot for trainer John Gosden, who sealed a double with Nazeef.

Frankly Darling may now be aimed at the Oaks at Epsom on 4 July where Pyledriver, who won under Martin Dwyer for trainer Willie Muir, is now a 14-1 shot for the Derby.

Battaash had been beaten three times at Ascot and can be temperamental, but Crowley felt he appreciated the calmer atmosphere.

"He is a superstar and I'm very grateful to be riding him," said the jockey, who is the retained rider for Sheikh Hamdan Al Maktoum.

"He has got better as time has gone on. Obviously two years ago at York he completely blew his lid before the race. I think not having the crowd did help today."

It was a heartwarming success for his groom Bob Grace, the likeable Bristol Rovers fan leading in his first Royal Ascot winner after 38 years of trying.

This was a 150th top-level Group One triumph for trainer Aidan O'Brien, although rider Moore was given a two-day ban for using his whip above the permitted level approaching the final furlong.

Japan, Headman and Barney Roy head the runners in the Prince of Wales's Stakes while Hollie Doyle will bid to become only the third female jockey to win at the meeting when she partners Win 'O 'Clock in the King George V Stakes.

The Queen, like other racehorse owners, is not allowed at the track and thought to be following the action from Windsor Castle.

She has two runners on Wednesday - First Receiver in the Hampton Court Stakes and Tactical in the Windsor Castle Stakes. 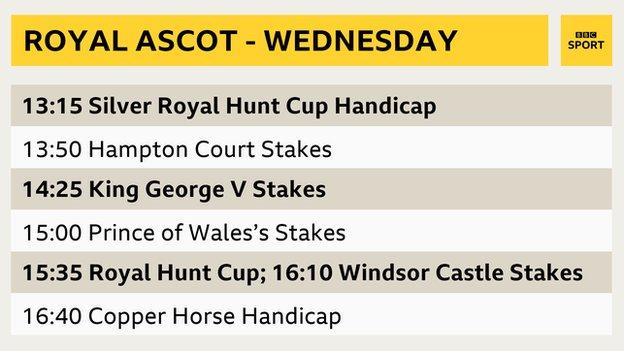