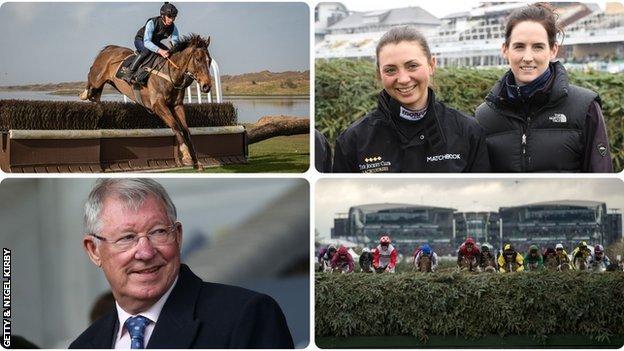 Could a female jockey win the Grand National for the first time? Will Sir Alex Ferguson be celebrating victory? Why are Welsh hopes so high?

There are plenty of potential stories as the world's most famous steeplechase returns at Aintree on Saturday, having been cancelled last year because of the coronavirus pandemic.

The National will be followed by millions globally as 40 runners negotiate 30 fences over four and a quarter miles.

Cloth Cap is the current 4-1 favourite to give owner Trevor Hemmings a record fourth triumph.

But what other stories might the race throw up?

It appears only a matter of time before history is made and a woman rides the Grand National winner.

He says Blackmore is likely to partner Minella Times if he runs, and Balko Des Flos otherwise.

If the betting is any clue, she will be on the former - backed from 50-1 in February to about 10-1 joint second favourite now.

And Tabitha Worsley, successful on Top Wood over the National fences in the Foxhunters Chase in 2019 less than two years after breaking her back in a fall, teams up with Sub Lieutenant for her trainer mother Georgie Howell.

The best National finish for a female jockey came when Katie Walsh was third in 2012 on Seabass for her trainer father Ted - who saddles Any Second Now this time.

She is now retired from race riding and believes despite Blackmore's success, opportunities to create history may still be limited.

"Without doubt all those girls have the ability to ride the winner, but I can't see a massive change in the number of female riders in the race," Walsh said.

Potters Corner, trained on the beach at Ogmore-by-Sea, near Bridgend, by Christian Williams, comes with a collection of Nationals already.

Victories in the Welsh and Midlands Nationals was followed by first place in a computer-animated Virtual Grand National when last year's race was called off.

The gelding is partly owned by Welsh rugby star Jonathan Davies along with the new Racehorse Club syndicate which has bought Balko Des Flos outright.

"He's brilliant - it's hard to explain really," said Williams. "Certain horses do that to you, don't they?"

When the weights for the race were announced in mid-February, Gordon Elliott was aiming Tiger Roll at a record-equalling third National victory.

Then a photo emerged from two years ago of the trainer sitting on a dead horse while on his phone, and he was suspended for six months.

Then Tiger Roll was withdrawn from the National, with owners Michael and Eddie O'Leary saying they were unhappy with the weight he had been allocated.

Tiger Roll runs instead in the Betway Bowl at Aintree on Thursday, and in the care of Denise Foster.

Foster, a respected figure in Irish equestrian circles, has stepped in at Elliott's Cullentra yard while he serves his suspension.

The Storyteller, Milan Native and Farclas are among several entries for the yard.

Will Discorama have a ball?

Andrew Gemmell has enjoyed some of the world's greatest sporting occasions - from the Ashes in Australia to world heavyweight boxing fights - and seen none of them.

Horse racing and music are among his loves and he managed to combine both when Paisley Park, named after the late singer-songwriter Prince's recording studio, won the Stayers' Hurdle at the Cheltenham Festival in 2019.

Now he hopes Discorama, runner-up in the National Hunt Chase at the same meeting, will give him a Grand National triumph.

"The English National captures the heart of millions of people," said Paul Nolan, who trains Discorama in County Wexford.

"It would absolutely be a dream come true if he was able to win."

There could be quite a post-race celebration if Discorama does triumph.

The Irishman plans to reopen the venue, once popular with West Ham players such as Bobby Moore and Harry Redknapp, next month.

But if fortune favours his horse, he could welcome outdoor customers two days after the big race under the government's plan to lift Covid-19 restrictions.

As the manager of Manchester United, Sir Alex Ferguson prized any victories on Merseyside.

He goes for another at Aintree with Give Me A Copper - a horse he part owns with four others.

Trainer Nicholls describes the horse as a sulky sort, akin to a footballer who's tricky to handle, but believes the unique Aintree test may ignite his enthusiasm

"I've always thought this race would suit him," said the 11-time champion trainer, who sent out the grey Neptune Colllonges to win the 2012 National from his Somerset stables.

Trainers, jockeys, owners and organisers will hope all horses return safely in what remains a risky race, although a safer one after changes introduced eight years ago.

There was one equine fatality in last year's contest - the first from 276 runners in the last eight editions.