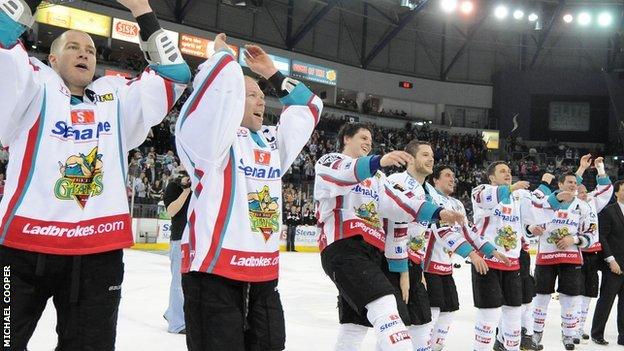 Belfast Giants have won the Elite League title for the first time since 2006 after defeating their rivals for the crown 5-1 at the Odyssey.

The Giants needed to win to secure the title and they got a perfect start in front of a 7,000 capacity crowd with goals from Robert Dowd and Jon Pelle.

Sheffield pulled one back thanks to Jeff Legue's strike but Aaron Clarke made it 3-1 in the second period.

Dowd netted the opener on 5.18 and Pelle scored just 24 seconds later to leave the Steelers stunned.

Sheffield netminder John DeCaro kept out Dowd's penalty shot and the visitor's capitalised when Legue's powerful shot made it 2-1 after 18.33.

Belfast regained control in the second period and Clarke restored the two-goal advantage on the powerplay on 33.19.

Deniset scored on a powerplay after 45.02 and captain Rebek completed a memorable night for the Giants team and fans when he netted a third powerplay goal on 58.15.

It is a third regular season title triumph for the Giants, with their first success coming in 2002.