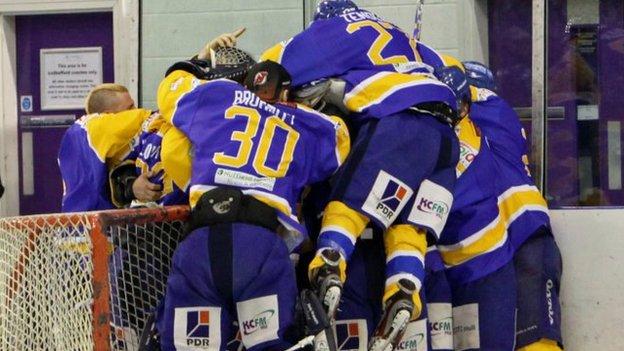 Hull Stingrays player-coach Sylvain Cloutier has commended his players after their surprise win over Sheffield Steelers in the Elite League play-offs.

The Stingrays set up a semi-final meeting with Nottingham Panthers in Nottingham on Saturday.

"I'm extremely excited, it's our biggest win and probably the biggest upset in hockey in the Elite League," he told BBC Radio Humberside.

"We're a small family and our heart and passion showed through."

He continued: "Our fans were so loud, we could hear them in the dressing room before the game and it really got us going.

"It's special. No-one outside of this club believed in us but we did and I told the players afterwards that result was like winning a trophy."

The Stingrays will need to upset the odds once more if they are to beat the Challenge Cup holders, having finished 44 points behind them in the league standings.

But Cloutier has insisted that his side are not merely there to make up the numbers.

"It's something that the players will never forget for the rest of their lives.

"I think a lot of the supporters of other teams will be pulling for us too," he concluded.