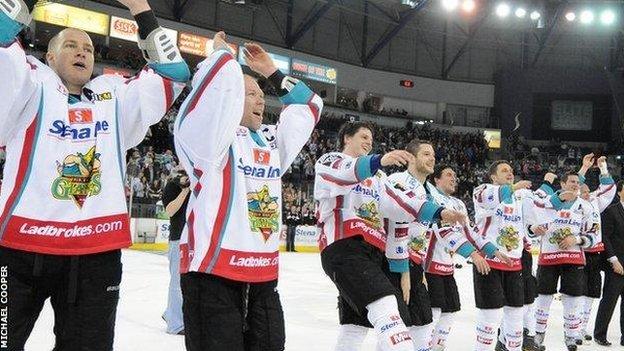 Cardiff Devils hope to welcome back three players in their squad as they bid to win the Elite League play-offs in Nottingham this weekend.

Defenceman Chris Frank and forwards Sam Smith and Tim Burrows will be assessed ahead of Saturday's semi-final against league champions Belfast Giants.

Nottingham Panthers and Hull Stingrays meet in the other semi-final.

"We need Belfast to play badly and get some luck to reach the final," said Devils coach Gerad Adams.

The Devils, champions in 1999, will face-off against a Giants side on a 19 game unbeaten run but Cardiff have beaten Doug Christiansen's men this season.

An injury stricken season has challenged the Devils, prompting a relaxed approach from Adams ahead of the season climax at the National Ice Centre.

"To make the finals this year, considering what we've gone through this year, this finals weekend is the most special," added Adams.

"Last year we expected to win it, this year it's the opposite."

The Devils, who suffered play-off final defeat in the last two years against the Panthers and Giants respectively, remain the only side to have appeared in every finals weekend.