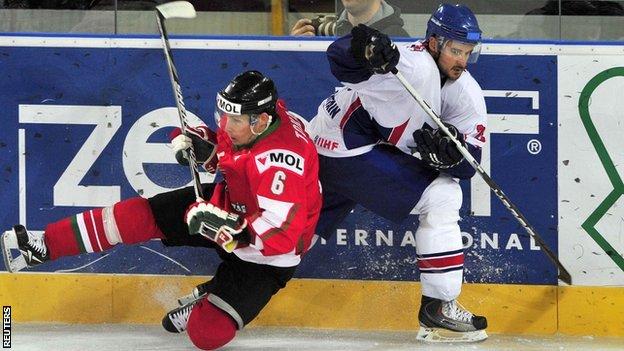 Great Britain maintained their place in Division One Group A of the World Championship with a hard-fought 5-4 win over Hungary in Slovenia.

They were facing relegation to Group B following losses to pool winners Slovenia, Austria and Japan earlier in the week.

But the victory over the Hungarians secured their place in the second tier.

Head coach Tony Hand said: "I think it's a great result and, because the pool was so tough this year, you don't have your weaker teams at the bottom.

"For us it's huge, because obviously we want to progress and if you go down there's no guarantee of coming back up."

GB got their campaign off to the worst possible start when they were narrowly beaten 3-2 by the hosts.

Slovenia twice took the lead only to be hauled back by Hand's side both times, before Tomaz Razingar fired the winner in the final period.

They lost their second match, against Austria, 7-3 leaving them in a precarious position.

A 4-3 win over Ukraine helped their cause before they were crushed 5-0 by Japan on Thursday.