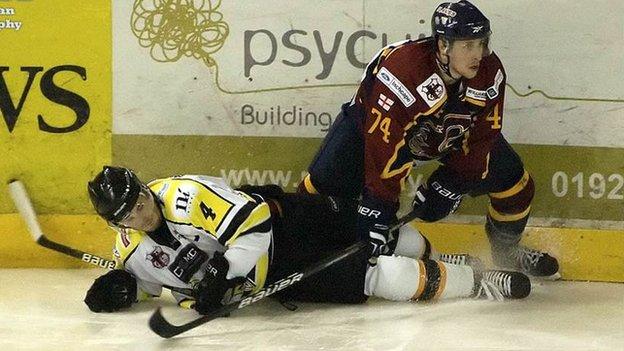 Towe, 24, has spent his last two seasons at Guildford after a three-year stint at Cardiff Devils.

Meanwhile Scottish-born forward Mark Garside has agreed to stay with the Giants for another two seasons.

Garside was one of only five players to play in all 62 Giants' games last season, scoring 10 goals.

Garside signed a two year extension prior to his departure for the World Championships in April where he played for Team GB under GB Assistant Coach and Giants Head Coach Doug Christiansen.

"I have coached Garside for five years and I am thrilled to have him for two more," said Belfast coach Doug Christiansen.

"He is a very intelligent player who works hard every night - he did a great job last season and I expect more from him next year."

Christiansen was also pleased with the capture of Towe.

"He skates extremely well, which is something I look for," said the Giants coach.

"He has developed his offensive game the last two seasons and I expect him to play a significant amount for us."

Christiansen added:"He can play both centre and wing but he will most likely start as a winger."

The Giants coach revealed that Towe had been offered more money by other teams but he wanted to "have the opportunity to play for the Giants and prove himself on a championship contender".

"He wanted to get back into the Elite League and that sacrifice is a sign that he is hungry to be a great player and work hard everyday to help the team," added the Giants coach.

In Guildford, Towe helped lead the Flames to three trophies including the EPL League title this season and the Playoff Championship in 2011.

Towe also played for Great Britain in the 2008 and 2010 World Championships.

Earlier this week, David Phillips agreed to return to the Giants on a two-year deal while Craig Peacock has also signed a contract extension with the Elite League champions.

Robert Dowd has left the Giants after signing for Swedish club Troja-Ljungby.