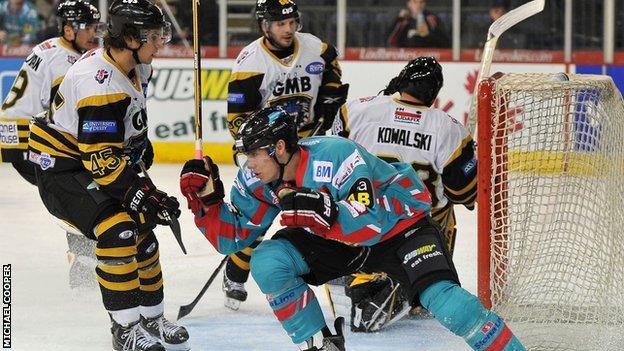 Robby Sandrock scored the only penalty in a shoot-out to give the Giants an Elite League victory over Nottingham at the Odyssey on Saturday night.

Noah Clarke put Belfast ahead on 15 minutes before David Ling levelled late in the first period.

Greg Stewart restored the hosts' lead in the second period but Bruce Graham made it 2-2 a minute later.

There was no further scoring and it went to a shoot-out, with Sandrock netting to win it for the champions.

The Giants had the better of the early exchanges but were hampered by two powerplays for Nottingham, who beat Coventry Blaze on Friday.

They survived both and took the lead when Clarke profited from a mistake in defence by Nottingham, losing possession near their own net.

Belfast looked good for a first period lead but conceded with one minute remaining, Ling equalising for the visitors.

The Giants took the lead once more 15 minutes into the second period with a close-range finish by Stewart.

The lead lasted just 58 seconds, when Graham brought the Panthers level once more.

The Panthers line-up included Anthony Stewart, who plays for the Carolina Hurricanes in the NHL.

The current lockout in the States means he is plying his trade with the Panthers for now.

Belfast are back in action on Sunday with an away game against Hull Stingrays.