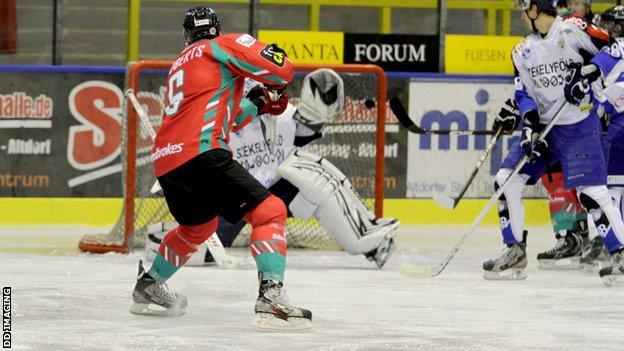 The Belfast Giants had a convincing 4-0 win over HSC Csikszerada of Romania on Sunday but had to settle for second place in the Continental Cup's Group B.

Hosts Landshut Cannibals went through by winning their three games.

Defenceman Sam Roberts fired the Giants into an early lead against the Romanian champions and Greg Stewart doubled the advantage in the second period.

Craig Peacock made it 3-0 at 36:16 and Andrew Fournier calmly rounded the netminder for a late fourth.

On Saturday, the Giants' hopes of reaching the semi-finals had suffered a setback when they crashed 7-1 to Bavarian side Landshut.

Cody Thornton, Peter Abstreiter (2) and Stephan Kronthaler had the German club 4-0 up before Scott Champagne netted for the Giants in the second period.

The Giants had started the group fixtures with an 11-1 win over Dutch team Eaters Geleen on Friday.

Mark Garside put the Giants ahead and further goals from Craig Peacock, Noah Clarke, Will Colbert and Scott Champagne left them 5-0 up at the end of the first period.