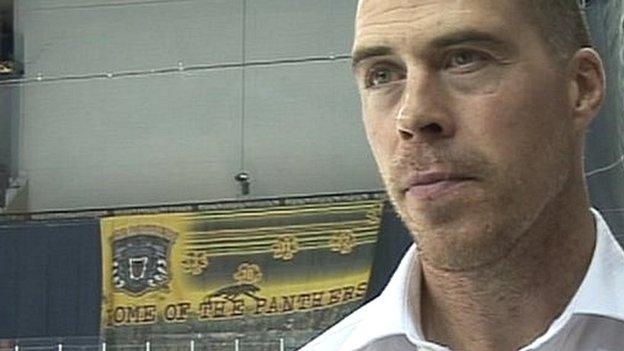 Nottingham Panthers player-coach Corey Neilson is happy to stay behind the bench despite returning to fitness.

Neilson, who has been out with a knee injury since being hurt against Cardiff on 23 September, watched his side crush Edinburgh 10-0 on Tuesday to go a point clear at the top of the Elite League.

"I could probably play right away if I had to but I don't have to," the 36-year-old told BBC Radio Nottingham.

"If the team is playing well then we will see how it goes."

He added: "There will come a point where I will probably get a game or two for fitness levels to make sure I don't turn into a big fat blob on the bench. But I have been working hard to keep myself in shape."

Nottingham started the season with a full complement of 11 imports, but have since added defenceman Guy Lepine and locked-out NHL forward Anthony Stewart to their roster.

Elite League rules mean that a maximum of 11 foreign players can "dress" for each match and Neilson has decided to remain on the sidelines.

But he will continue to carry extra imports as possible injury cover.

"It's day to day - a twist here and there and you can be down a body," he added. "If you get injuries it's good to have options."