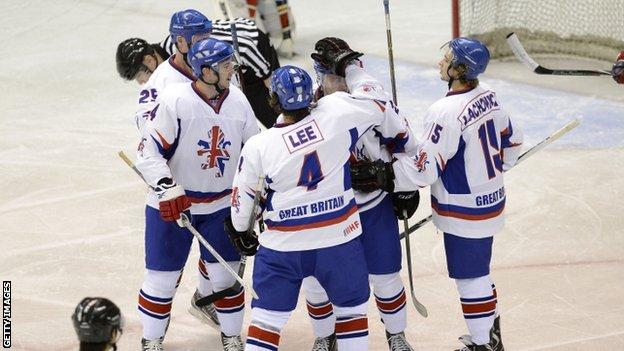 Tony Hand's side, who beat Romania on Saturday, will now compete at one of the final qualifying events, held in Latvia from 7-10 February.

Britain, who were Olympic champions in 1936 and bronze medallists in 1924, last competed at the Games in 1948.

Hand said: "This is a huge moment in the history of British ice hockey."

In a match billed as the GB's biggest in 76 years, they took the lead on a power play halfway through the opening period through Craig Peacock.

Ben O'Connor doubled the lead 30 seconds later for his third goal of the tournament.

Japan's Shuhei Kuji scored early in the third period but the hosts could not find an equaliser as Britain's goaltender Stephen Murphy saved all but one of the 22 shots he faced.

Three teams will eventually earn berths for Sochi through the qualifying events - also being held in Germany and Denmark - and will join the top nine teams in the International Ice Hockey Federation's world rankings.

A delighted Hand praised his side: "No-one should underestimate how much this means to British ice hockey. It is massive.

"We are one step away from Sochi 2014 and now get to test ourselves against some of the world's best hockey nations."

An injury-hit Great Britain women's team, meanwhile, came from behind to beat the Netherlands 2-1 in their pre-qualifying game in China.

Their Olympic dreams had disappeared as a result of defeats by the hosts and France, and they seemed destined for a third reverse when Mieneke de Jong gave the Netherlands the lead midway through the second period.

But goals from Lauren Wilkinson and Katie Henry restored pride.

Netminder Nicole Jackson was in sparkling form, saving 32 of 33 shots.