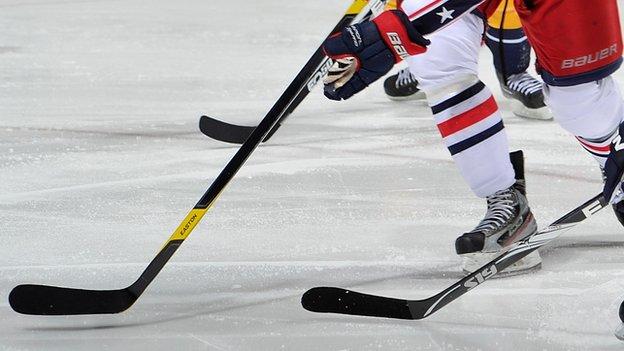 Despite defending well for much of the game, the Capitals' prowess in front of goal has been an issue of late.

Stingrays keeper Ben Bowns was kept busy at times, but even he would have been surprised at conceding only once.

But it was Tomas Hiadlovsky in Edinburgh's goal who was breached first, despite saving Jereme Tendler's shot.

However ex-Capital Jason Silverthorn was on hand to tap in and give Hull a slender lead going into the first interval.

The home side continued to huff and puff, with Richard Hartmann, Juraj Senko and Michal Dobron all testing Bowns.

But their reward came when Cingel helped in Senko's drive, which had been parried by Bowns.

Parity didn't last long as Hull regained their lead when Silverthorn drew out Hiadlovsky, only for Kurtis Dulle to finish.

Hull had the bulk of possession in the third period, without carving any real clear-cut chances.

Edinburgh, though, remained a threat on the break as Peter Holečko and Marcis Zembergs going close in particular.

But with time running out, the Caps pulled Hiadlovsky in an attempt to grab a leveller, but Tendler got the break and finished into the empty net.

The outcome of the match and of the weekend, with the Caps losing in Fife on Saturday, left Edinburgh player-coach Richard Hartmann far from happy.

He fumed: "There were no positives from that as we've lost two games over the weekend again.

"We did well last week and you could see the boys were working hard, but now we can't seem to score again.

"I need to speak to the boys and tell some of them they are too comfortable and they're not doing what they should be."

Hull Stingrays player-coach Sylvain Cloutier said: "We got a great response after we gave away two points at Belfast on Saturday.

"But these matches against the Scottish teams in the Conference show the system is working and the games are tight and competitive."