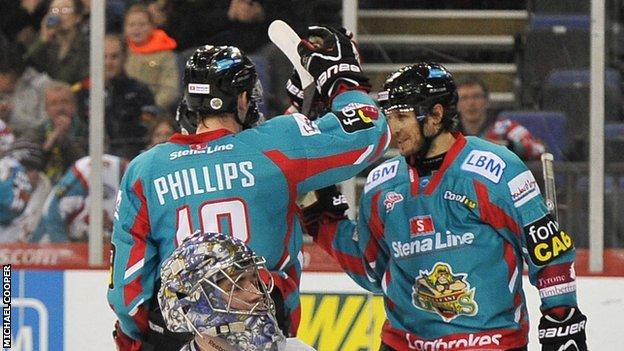 Greg Stewart struck in overtime to give Belfast Giants victory over Braehead Clan at the Odyssey on Thursday night.

Matt Haywood put the Scots ahead and Stewart levelled before Drew Miller added a second for the Clan.

Kevin Saurette equalised with his first goal for Belfast, only for Davide Nicoletti to restore Braehead's lead.

Robby Sandrock netted to make it 3-3 and Stewart's overtime winner means the Giants have closed the gap on leaders Nottingham to four points.

The champions also have two games in hand on the the Panthers, who slipped up on Thursday night with a 7-3 defeat by Sheffield Steelers.

In front of a lively and festive crowd, the Giants were stunned by an early Braehead goal, Haywood firing home from close range after five minutes.

The Giants were suitably stirred and peppered the Clan goal with shots.

Braehead netminder Garrett Zemlak lost his helmet in one furious siege of his goal and a lengthy stoppage followed.

His net was finally breached after 15 minutes by Stewart and the game really opened up in the second period, as Braehead twice recaptured the lead only for Belfast to respond accordingly.

Miller scored 21 seconds into the period for the visitors but Saurette restored parity six minutes later.

Braehead went 3-2 ahead courtesy of a stunning long range effort from Nicoletti but, again, they enjoyed the lead for a brief time before the Giants equalised once more, with Sandrock placing his shot on a powerplay.

The third period saw the Giants exerting early pressure but unable to convert it into a lead.

Neither side could take advantage of respective powerplays midway through the period and, still tied at 3-3, the game entered overtime with Stewart scoring the decisive goal.