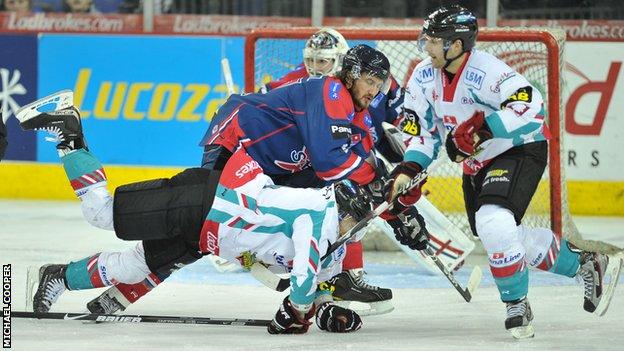 The Giants stay six points behind leaders Nottingham and Belfast now have only one game in hand on the Panthers.

AJ MacLean put Dundee ahead before Daymen Rycroft levelled for the Giants.

The defeat probably means Saturday's home clash with Coventry is a must-win clash for Doug Christiansen's defending Elite League champions if they want to maintain a realistic title challenge.

MacLean put the Stars ahead with a powerplay goal in the eighth minute before Rycroft levelled five minutes before the end of the opening period.

Belfast appeared to be gaining control when Sandrock netted a powerplay goal early in the second period but Dundee were ahead again within five minutes after goals from Bowen and Bagron.

Dundee keeper Nic Riopel was producing a starring role for the visitors as he made a number of brilliant saves to keep his team in the lead.

Wirll doubled Dundee's advantage midway through the final period and his late empty net goal sealed a memorable win for the Scottish outfit.