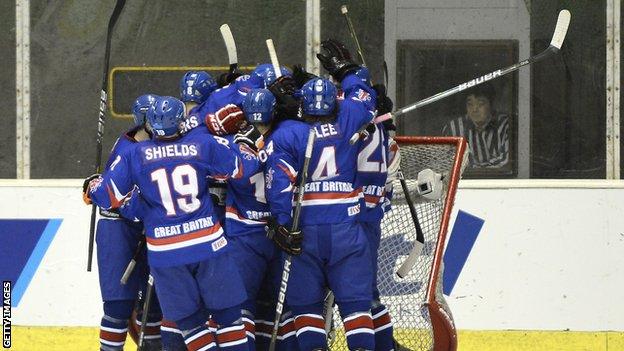 Great Britain's men's ice hockey team have had a financial boost as they attempt to qualify for the Winter Olympics for the first time in more than 60 years.

The British Olympic Association has obtained a grant of £63,000 from the International Olympic Committee.

Great Britain won the gold at the 1936 Games but have not appeared since 1948.

GB will compete in a four-team tournament in Latvia from 7-10 February.

The winner will qualifying for the 2014 Winter Olympics in Sochi, Russia.

Ranked 21st in the world, GB beat Japan 2-1 in a tournament last November to qualify for Latvia, where they will face the 11th ranked hosts, world number 14 France and 17th-ranked Kazakhstan.

The grant will help towards training and travel expenses, and is designated by the IOC's Olympic Solidarity Programme for team sports at the Winter Olympics.

Ice Hockey UK's secretary general Andy French was delighted with the money that will help the team in their attempt to qualify for the 2014 Games, to be held in Russia.

"Ice Hockey UK is overwhelmed with the support of the British Olympic Association and delighted with the International Olympic Committee in reviewing and approving the grant requested for ice hockey to support our efforts to qualify for the Olympic Winter Games in Sochi and, if we are successful in doing so, create some modern-day history for our sport in the UK."

The BOA's chief exec Andy Hunt said, "Ice Hockey UK is attempting to accomplish something that hasn't been done for more than 60 years, and we are delighted to support their efforts by securing this grant."