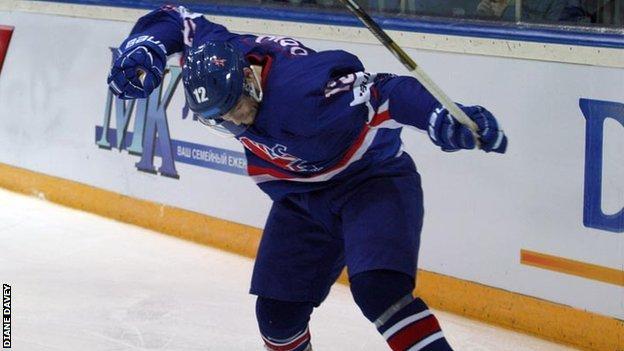 Great Britain's hopes of qualifying for their first Winter Olympics since 1948 suffered a blow after a 6-2 opening defeat by hosts Latvia.

Team GB must top the group but instead find themselves bottom with two matches against France and Kazakhstan to play.

The hosts went 2-1 ahead in the second period and hit a further three past GB keeper Stevie Lyle in the final stages before Craig Peacock's consolation.

"It was always going to be a tall order for GB with just one day's preparation to beat top seeds Latvia on home ice.

"The score in isolation suggests a heavy defeat, but it doesn't really tell the story of the game or the performance of a British side that gave their all.

"They must be more disciplined if they are to have any chance of going through.

"Latvia's power play was outstanding and punished GB, so that should serve as a warning to stay out of the penalty box."

Great Britain can still top the group and qualify for Sochi 2014, but they must win their two remaining matches against France on Friday and then Kazakhstan on Sunday - plus hope Latvia drop points against one of those sides.

Although the team will now rely on other results they have reason to be proud after matching their more illustrious opponents, whose team featured several NHL players, for much of the game.

However they were undone by occasional ill-discipline and Latvia took advantage of the power plays, repeatedly unlocking Britain's defence when they were a man down.

"They are a very good ice hockey team but they scored three power-play goals and you can't give a team of that calibre those sort of chances because they will put them away," said GB goalscorer Peacock.

The team reached this group after a surprise victory over Japan in November and Peacock believes they can draw strength from that result as they head into their match against the French on Friday morning.

"We are still upbeat," he insisted. "When we went to Japan we didn't win the first game there but we still managed to get through and there are some good teams here who will take points off each other so there is still chance and we still have hope."

In Thursday's other match world number 17 side Kazakhstan shocked France with a 3-2 victory and are second in the group behind Latvia.