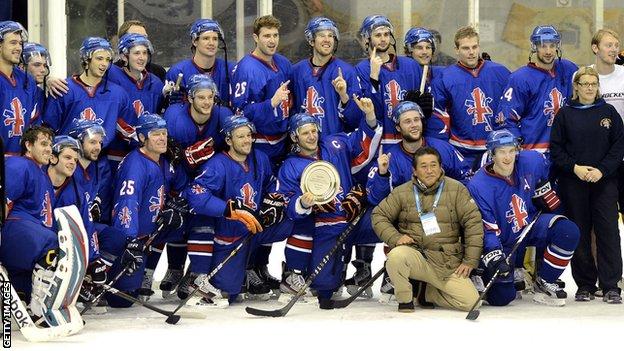 Great Britain lost 6-0 to Kazakhstan to make it three defeats out of three in their 2014 Sochi Winter Olympics qualifying campaign.

Having lost to hosts Latvia on Thursday and France on Friday, GB were playing for pride at the Riga Arena on Sunday.

But Kazakhstan established a 2-0 lead in the opening 130 seconds, Ben Bowns making a string of saves to prevent an even heavier defeat.

"This has been a big learning curve for the players," said coach Tony Hand.

GB had high hopes of closing their qualifying campaign with a win against a side just four places above them in the world rankings.

But they found themselves comprehensively outplayed by a classy Kazakhstan side.

The performance of Bowns, making his first international start in place of veteran Stevie Lyle, was one of the few positives as the 22-year-old kept the deficit at six.

"We probably took too many penalties and that hurt us," added Hand. "We kept it at a 0-0 final period and we can take heart from that."