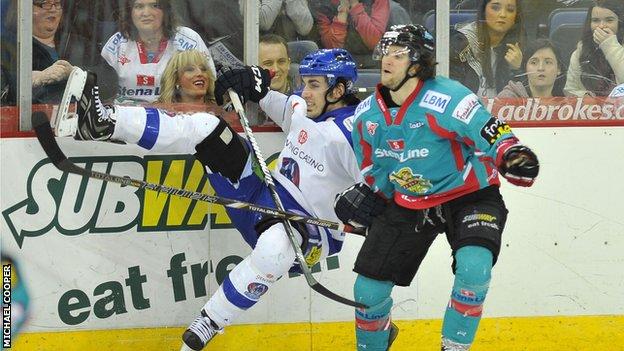 Noah Clarke put Belfast ahead and while Adam Henrich levelled, Matt Towe and Chad Langlais scored further Giants goals before the end of period one.

Dustin Cameron's Coventry goal was the only goal during the second period.

Clarke, Gareth Roberts, Craig Peacock and Daymen Rycroft (two) were all on target for Belfast in the last period.

The Giants, smarting from Friday's disappointing home display, started impressively and Blaze netminder Peter Hirsch had to make a couple of smart saves to repel the early onslaught.

Robbie Sandrock did hit the post before Clarke struck the Giants ahead in the 8th minute.

Henrich levelled with a powerplay strike but two goals in the space of 18 seconds from Towe and recent signing Langlais put the home side 3-1 up by the end of the first period.

The first session concluded with Belfast captain Adam Keefe and Coventry's Benn Olson clashing which led other players from both teams to get involved.

Coventry regrouped to boss possession in the second period and it was little surprise when Dustin Cameron netted for the visitors.

Belfast were also grateful to keeper Garrett Zemlak who made a couple of great saves to maintain the home team's advantage.

However, the game turned decisively in Belfast's favour four minutes into the last period as Roberts and Peacock scored two goals within 18 seconds.

With Coventry starting to lose their discipline, Rycroft poached two further goals which were split by Clarke's second goal of the night.

The Giants remain two points behind leaders Nottingham who defeated Braehead 7-3 on Saturday evening and the Panthers also have a game in hand on Belfast.

Nottingham can extend that lead to four points by beating Fife at the National Ice Centre on Sunday afternoon.