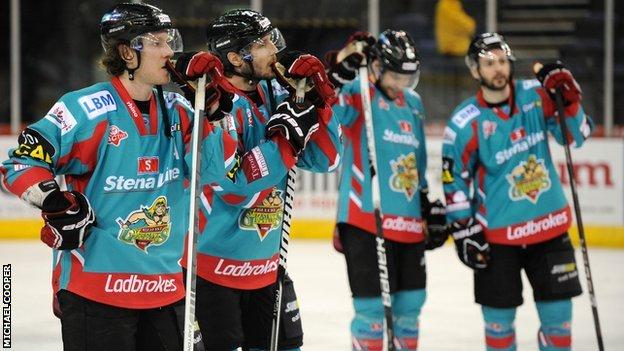 The players and staff of the Belfast Giants have walked away from their contracts after it emerged the American businessman due to become the team's owner was a registered sex offender.

In January, it was announced that 39-year-old US businessman Christopher Knight had bought a majority shareholding in the ice hockey team.

But now it has been revealed that he is a registered sex offender in Florida.

The Belfast Giants are currently third in the Elite League and play their home games at the Odyssey Arena in Belfast.

Knight, whose address is given on the Florida Department of Law enforcement website as West Sussex in England, was charged in 2003 with Lewd or Lascivious Battery.

This means he is alleged to have engaged in sexual activity with a person aged between 12 and 15, and he remains on the sex offenders register.

It is understood the players and staff walked away from their contracts last week.

On Monday, they signed new contracts to be paid for by the Odyssey Trust, a charitable company that oversees the Odyssey Arena, meaning the Giants will be able to fulfil their remaining fixtures.

Trust chairman Brian Burke said: "This has not been an easy period for the Belfast Giants but it is highly commendable that the players, who were without contracts, fulfilled their commitment to the team's two games this past weekend including helping to raise money for the team's nominated charity at the match on Friday evening.

"We would also like to assure the loyal Belfast Giants fans that we are committed to protecting the excellent reputation and long-term future of the team."

An Elite League statement also said that the position of the Giants in their competitions "is not under threat".

"The League has been kept fully informed about recent events and the management, coaches and players have the backing of the League following recent events," added the Elite League statement.