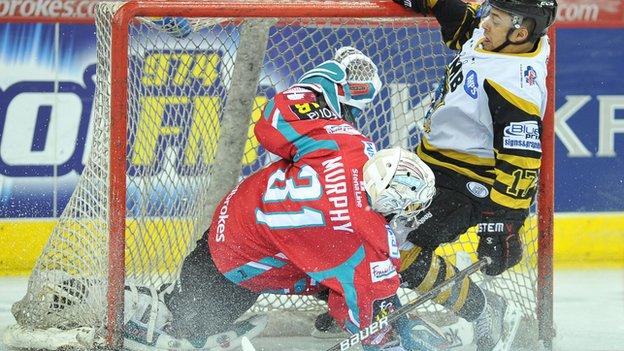 The Belfast Giants crashed out of the Challenge Cup after losing 4-3 at home to Nottingham Panthers in Tuesday's semi-final - 9-4 on aggregate.

The Giants led through Matt Towe but Nottingham hit back with a Kelsey Wilson goal late in the first period.

Colin Shields and Jeff Mason scored in the second period for Belfast but the Panthers equalised twice with powerplay goals by Matt Francis and Jordan Fox.

Nottingham's Patrick Galivan scored the only goal of the third period.

So Nottingham, Challenge Cup winners for four of the last five years, are into the final again where they will meet Sheffield or Braehead.

The Giants now must focus on defending their Elite League crown.

They are currently in second place, two points behind Nottingham, and the two sides have a crucial double header at the Odyssey Arena on 15 and 16 March.