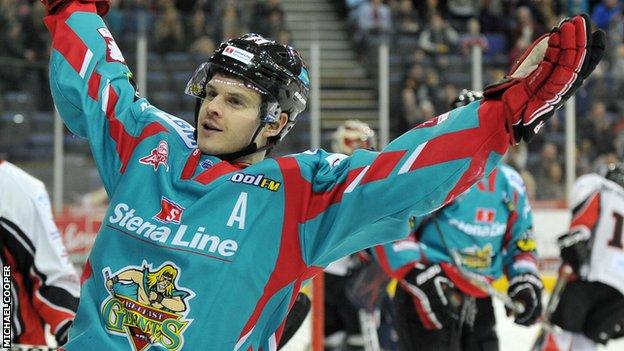 The Belfast Giants' hopes of retaining the Elite League title received a serious setback when they lost 3-2 away to the Edinburgh Capitals on Sunday.

The Giants were 3-0 down to the Scottish outfit before goals by Craig Peacock and Andrew Fournier raised hopes of a dramatic comeback.

Defenceman Brent Patry had got Edinburgh off to a great start with a goal on 85 seconds.

Rene Jarolin added a powerplay goal and Martin Cingel got the Capitals' third.

With four games left, the Giants are six points behind Nottingham Panthers who beat Hull 3-1 on Sunday.

Defeat in either of their two fixtures next weekend at home to Nottingham will see Doug Christiansen's Giants surrender the league crown they won last year.

On Saturday, Belfast had kept their hopes alive with a 6-2 win away to the Braehead Clan, with Fournier scoring a hat-trick.

Fournier scored the only goal of the first period and Noah Clarke made it 2-0 with a powerplay score.

Matt Hanson got one back for Braehead but Brock Matheson, Fournier and Darryl Lloyd stretched the Belfast lead to 5-1.

Braehead scored again through Matt Haywood but in the third period Fournier netted his hat-trick goal.