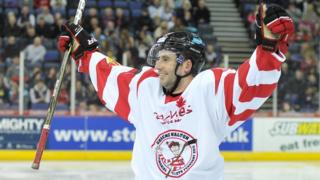 The Belfast Giants retire Graeme Walton's shirt as the defenceman's playing careers comes to an end.

The 31-year-old spent 10 years with the Giants and became the first Northern Irishman to play for Great Britain.

Walton, from Dundonald, won two league titles during his time with the Giants and his last home game will be the 30 March play-off quarter-final against Edinburgh Capitals.