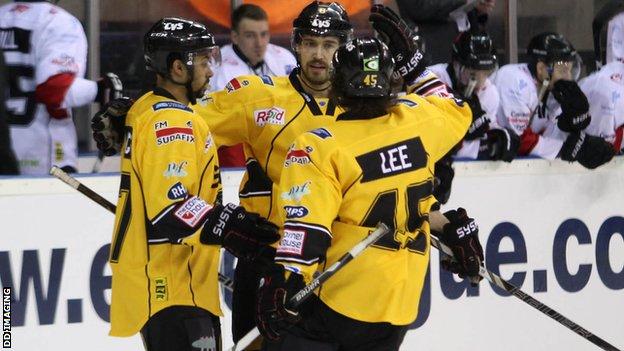 Nottingham Panthers kept alive their treble hopes as they held off a gutsy Cardiff Devils side in a thrilling first Elite League play-off semi-final.

Cardiff led after 36 seconds when Max Birbraer netted, but Panthers hit back strongly through Bruce Graham's double and a tidy Matthew Myers effort.

"Panthers were the better team, but both sides played good intense and hard hockey.

"Nottingham's strength in depth showed through and after the first 10 minutes they dominated.

"Cardiff played a decent game but Nottingham's top line is capable of scoring against any side in the league."

A superb Chris Blight goal revived the Devils, but Myers and Graham completed hat-tricks in the last period.

Mark Richardson pulled one back but Panthers progressed to Sunday's final.

They will face either Coventry or Belfast, who meet in the second semi-final later on Saturday.

The match provided more play-off heartache for the Welsh side, who are yet to win the sport's end-of-season showpiece, despite being the only side to have made it through to all ten finals weekends.

Their chances of ending that miserable run and causing an upset against a Panthers side brimming with confidence following their Elite League and Challenge Cup double took a huge upturn after a blistering start.

The Nottingham fans, watching their side playing on their own rink, were stunned as Birbraer redirected Stuart MacRae's strike past Craig Kowalski.

However, Panthers refused to be rattled and, after surviving a vital Cardiff powerplay, they levelled on their own powerplay when Graham converted a rebound.

It was awesome to score a hat-trick. It's a great atmosphere out there and not just from the Nottingham fans.

The swift reply seemed to settle Nottingham and signalled a spell of dominance and it was no surprise when Graham grabbed his second goal of the afternoon.

A slick move involving Jordan Fox and David Ling culminated in the rangy forward planting an emphatic one-timer past Chris Whitley to complete the scoring in an enthralling opening period.

Panthers remained into control in the second and deservedly stretched their lead when Myers skated in from the left and drilled a low shot past Chris Whitley.

But just as the game appeared to be slipping out of their grasp, Devils hit back on the powerplay when Blight skated end-to-end, beat three men and fired a superb shot high past Kowalski.

The injury-depleted Devils piled forward in the final period, but the home defence remained firm and Panthers, who had beaten their Welsh opponents in the previous two finals, rounded off the victory in a frenetic finale.