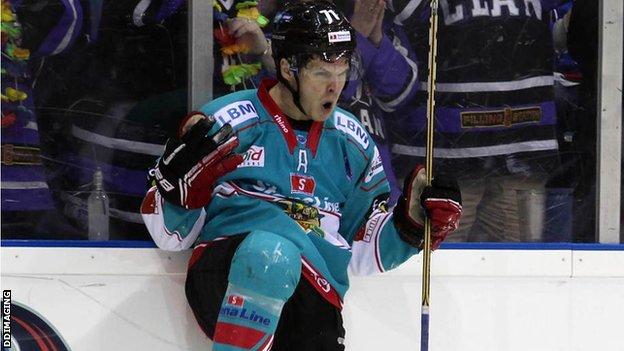 Two quick goals from Colin Shields and Craig Peacock looked to have sealed the win before Blaze hit-back in the second period through James Griffin.

But Noah Clarke's strike and a second from Peacock settled Belfast's nerves.

They will now meet treble-chasing Nottingham, who beat Cardiff in the other semi-final.

In reality, Blaze's hopes of ensuring a fairytale farewell for departing coach Paul Thompson were all but over after a one-sided first period.

Although they fought back in style and were the better team in the middle period, overturning a 3-0 deficit always seemed too much to ask against an unforgiving and relentless Belfast side.

A flurry of big hits and aggressive hockey from both teams produced relatively few chances in a cagey opening 10 minutes.

But Giants looked stronger and sharper in attack and, after Hirsch had made a couple of fine saves, they deservedly went ahead through Rycroft's calm finish.

Shields made it 2-0 with a quality one-timer after good work by Peacock.

And Peacock's classy individual effort left the Midlands side with a seemingly impossible task with more than two thirds of the game remaining.

Coventry showed commendable spirit to regroup and were on top for long spells of the second period.

Giants were forced on the defensive and keeper Stephen Murphy had to make a series of excellent saves to preserve the three-goal lead.

At the other end, a Gregory Stewart shot hit the post and Hirsch made a good stop to deny Kevin Saurette.

However the Blaze pressure finally told and Griffin converted a good chance after being teed up by Adam Henrich.

The goal seemed to wake Giants from their second-period slumbers and they cruised to victory with the minimum of fuss in a dull last 20 minutes.

Clarke added a fourth with a fierce strike early in the final session and Peacock sealed things on the powerplay with less than two minutes to play, giving Belfast the chance to gain revenge over Nottingham for being pipped to the Elite League title.