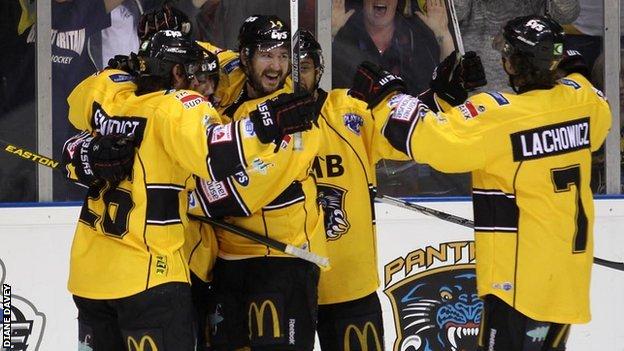 A freak Rob Lachowicz goal and Jonathan Weaver's rasping strike put Panthers 2-0 up at the end of the second period.

Belfast fought back to level at 2-2, through Robby Sandrock's sweet strike and Kevin Saurette's rebound.

But Jordan Fox grabbed the decider on the rebound in an extra period powerplay to break Belfast hearts.

I'm so proud of these guys. It's a remarkable achievement to win all three trophies. We'd be lying if we said we thought we'd win all three. We knew they wouldn't give up and we'd still be in a battle even at 2-0.

Ultimately, it was the Panthers' powerplay prowess that proved the difference between the top two sides in the Elite League in a feisty and pulsating final.

Giants, who eased past Coventry in Saturday's semi-final, were smarting from having lost the League crown to Nottingham in their own backyard last month and desperate for revenge.

But, despite their sensational fightback when the trophy had already looked lost, they could not prevent Panthers completing a treble of Elite League, Challenge Cup and play-offs in front of a sell-out crowd at the sport's end-of-season showpiece.

Both goalies played a key role in a frantic but scoreless opening period.

Belfast were first to show, Panthers' Craig Kowalski - voted the best keeper in the Elite League - showing his quality with a trio of decent early stops.

But Kowalski's opposite number Stephen Murphy was then by far the busier for a 10-minute spell, making a series of top saves.

Nottingham's strength in depth began to show as the Giants struggled to cope with their pace and class whatever line was on the ice.

David Ling and Bruce Graham, a hat-trick hero in Saturday's semi-final win over Cardiff Devils, both hit the post in an almighty scramble and Lachowicz and Matt Francis were both foiled by the excellent Murphy.

But Giants ended the first period the stronger, Kowalski making two incredible saves on the powerplay to deny Noah Clarke and Saurette.

Nottingham Panthers have been involved in seven of the 10 play-off finals, winning four - including the last three.

The intensity stepped up in the middle session as the game became increasingly fractious.

Panthers survived their third penalty with relative ease, showing just why they have the best penalty kill record in the league. And, having done so, they began to dominate again.

Steve Lee hit the frame of the goal for a third time for Nottingham and Murphy pulled off a staggering save to keep out David Clarke's vicious angled shot.

But the Panthers pressure was relentless and it finally told, albeit with a bizarre goal, when their opponents were short-handed.

Lachowicz was the man credited with the goal but his tip from a Patrick Galivan shot at goal went over and only ended up in the net when it bounced on the top of the net and rebounded in off the unfortunate Murphy.

Gregory Stewart should have levelled but could not react quickly enough to turn the puck in at the far post as it flashed across goal.

Panthers soon made them pay and again it arrived on the powerplay, and was beautifully and patiently created for Weaver who crashed the puck home.

Eventually Giants did find the net on the powerplay when Sandrock hammered the puck past Kowalski to bring a one-goal game early in the final period.

Another powerplay immediately followed and Jeff Mason almost levelled but Giants did not have to wait long to make it 2-2.

Kowalski saved Craig Peacock's initial shot but could keep hold of the puck and Saurette finished coolly from out in front of the net.

Giants expertly killed off six minutes of powerplay in the closing stages to force overtime.

But Fox won it, on another powerplay, to earn Nottingham a third successive play-off success.