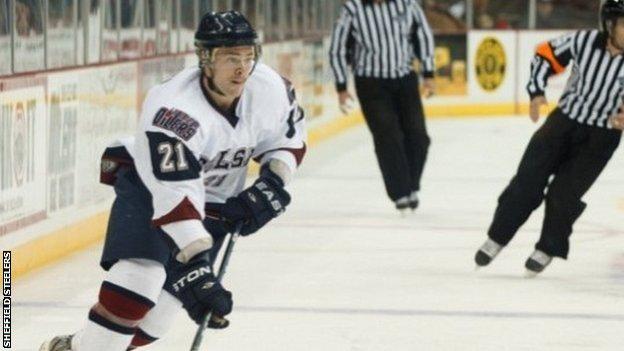 The Canadian has also played for the Mississippi Sea Wolves, alongside former Steeler Colt King at Rapid City, and for SG Cortina in Italy.

Head coach Doug Christiansen said: "There is no question that Ryan is an elite offensive player."

Menei told BBC Radio Sheffield: "Coming to England wasn't part of my plans, but Doug sold me on Sheffield."

He continued: "I want to win championships and that's an expectation in Sheffield."

Menei, who will make his Steelers home debut on Sunday, 8 September against the Nottingham Panthers, led the Oilers in scoring last season with 34 goals and 82 points.

Christiansen said: "What really pushed me to offer Ryan a contract was the reviews people gave him, his former coaches and team-mates raved about his attitude and skillset.

"Ryan will be a player who puts up numbers for us but I am not signing him to carry the load, I merely expect him to be one of a number of very good players who can help lead us on any given night."