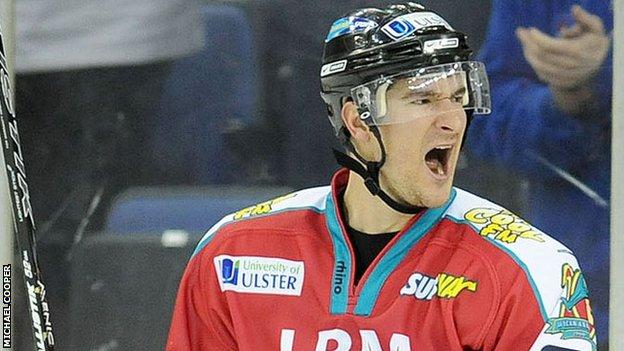 Jeffrey Szwez is returning to play with the Belfast Giants for the 2013/14 season, the club announced on Thursday.

Szwez was part of the Giants team coached by Steve Thornton that won the Elite League play-off title in 2010.

He played with the likes of goalie Stephen Murphy, Kevin Phillips, Colin Shields and Evan Cheverie in Belfast.

All will be on board for the new campaign under new boss Paul Adey, the former coach of Nottingham Panthers.

The returning Cheverie welcomed the signing of his fellow Canadian Szwez who had been playing in Germany, a move which completes Adey's first Giants roster.

"Jeffrey is just a complete hockey player. He can scrap, he can score, can play with finesse. He's got the experience and is able to play in all situations," said Cheverie.

"Everyone is going to fit in really well. For me, it was an easy decision to come back."

Todd Kelman, general manager of the Giants, said: "The signing of Jeffrey Szwez speaks for itself. I believe he was a huge reason why we won the play-off Championship in 2010.

"He is an important final piece in our plans for the season. Szwez is big, strong, good in the corners and is used to playing at a higher level than the Elite League."

The Giants will return to action in a pre-season double-header against Italian side Bolzano on 31 August and 1 September at the Odyssey Arena.