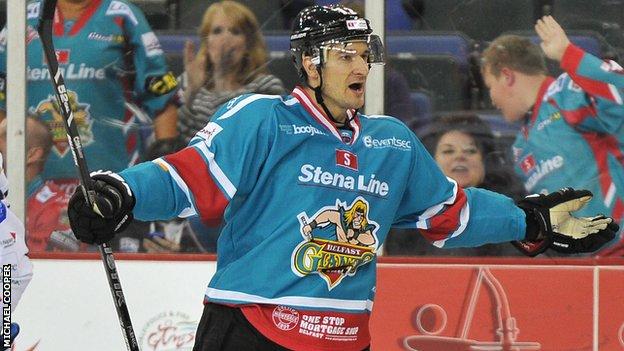 Belfast Giants cruised to victory over Edinburgh in the Elite League opener at the Odyssey on Saturday night.

After a scoreless first period Jeffrey Szwez scored twice in the middle session.

New signings Dustin Whitecotton and Chris Higgins opened their accounts for the Giants in the final 20 minutes.

The scoring was rounded off by captain Adam Keefe with netminder Stephen Murphy having to make just 13 saves for the shutout.

On a night of many firsts, coach Paul Adey got his maiden win in charge of the team.

Belfast dominated the game from start to finish but Capitals goalie Tomas Hiadlovsky kept them at bay with a string of superb stops.

It took until 26:05 for Szwez to convert on the powerplay and then again at 29:35 from a tape-to-tape pass by Evan Cheverie.

Hiadlovsky was still producing miracles but eventually spilt a third period shot from Calvin Elfring that allowed Whitecotton to score at 44:31 - Elfring assisted on the first three goals.

A beautiful tip-in by Higgins from a Robby Sandrock shot at 51:07 made it 4-0 and Keefe's nifty finish as he picked up an aerial pass from Darryl Lloyd just 31 seconds later made it a perfect start for the Giants in their quest to regain the league title.

The Giants will travel on Sunday to take on the Cardiff Devils.