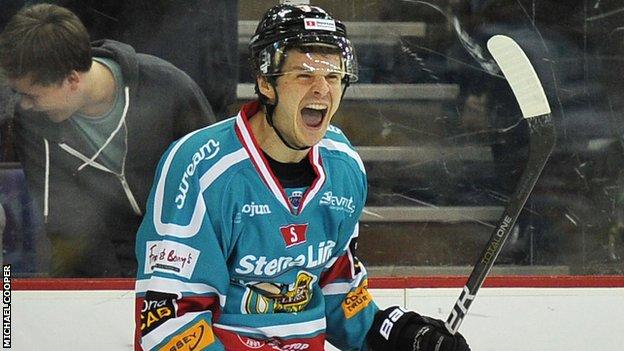 The Belfast Giants made sure there would be no winning return to the Odyssey Arena for former coach Doug Christiansen as they defeated the Sheffield Steelers 4-2.

The victory moved the Giants to within two points of League leaders Dundee Stars who lost to Braehead on Saturday.

Jeff Legue and Robert Dowd replied for the Steelers.

It was tight contest throughout but the Giants got off to the perfect start with Peacock, who re-signed for the club this week, announcing his return by opening the scoring after only 54 seconds.

It took until the second period at 26:03 for the Giants to double their lead when Szwez scored on the powerplay.

There were a flurry of goals in the final twenty minutes as Legue knocked home a rebound to put the Steelers back into the game but the Giants immediately responded when Keefe scored his sixth of the season.

Former Giant, Dowd, blasted the goal of the game past Giants netminder Stephen Murphy at 46:46 to set up a grandstand finish.

However, after enjoying a little luck in front of their own goal it was Whitecotton who secured Belfast's win in front of a crowd of 4,500 by scoring the empty netter.

The Giants are away to the Coventry Blaze on Sunday.