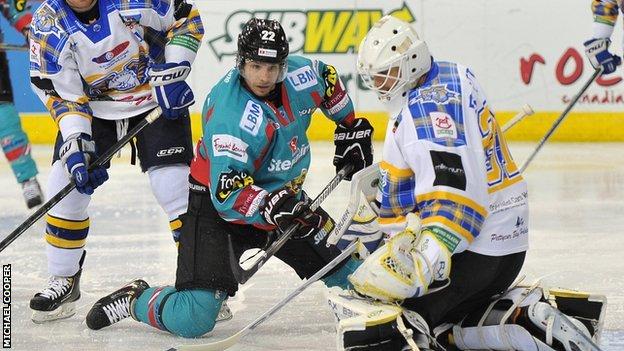 The Belfast Giants twice fought back from two goals down to defeat Coventry 7-4 in Sunday's Elite League game.

After the emotion of Saturday's home win over Doug Christiansen's Sheffield, Belfast made a slow start in Coventry.

Brookwell's goal on 31:51 and Szwez's opening strike on 33:24 left the contest level after the second period.

A Ross Venus goal restored Coventry's advantage early in the final period but Sandrock (46:19) quickly had the Giants on terms and further goals from Mason (49:35), Saurette (58:17) and Szwez (59:37) ensured a highly satisfactory weekend for Paul Adey's side.

On Saturday, the Giants prevented a winning return to the Odyssey Arena for former coach Doug Christiansen as they defeated Sheffield 4-2.