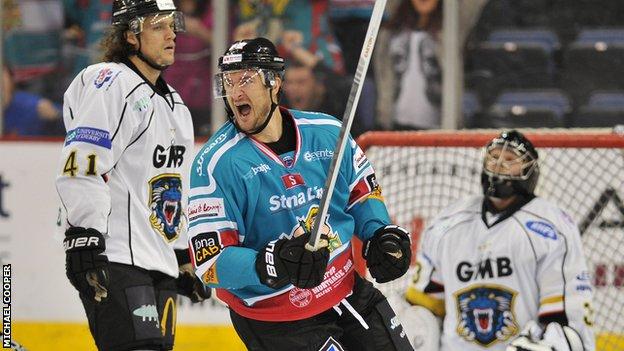 Belfast Giants clinched a 4-3 comeback victory over the Panthers in Friday's Elite League game at the Odyssey.

Dave Clarke put Nottingham ahead and Cody Brookwell levelled before the Panthers took a deserved 2-1 lead through Lynn Lyons.

The league leaders fought back in the third period with Calvin Elfring making it 2-2 before Robby Sandrock and Jeff Szwez netted.

Matt Ryan scored a late consolation for the English visitors.

Clarke netted the fifth minute opener on the powerplay before Brookwell's finish from a the rebound after 14 minutes.

Lyons restored Nottingham's advantage midway through the second period before Calvin Elfring's shot from the blueline brought the teams level nine minutes into the third period.

Belfast moved in front thanks to an astonishing goal from Sandrock, who unleashed a routine dump in on goaltender Craig Kowalski from his own blueline.

Somehow the puck got through the netminder and ended up in the net.

Szwez iced the game courtesy of an empty netter with 55 seconds left and there was still time on the powerplay for Ryan to score.

The Giants are back in action on Saturday night with an away Challenge Cup game against Braehead Clan.