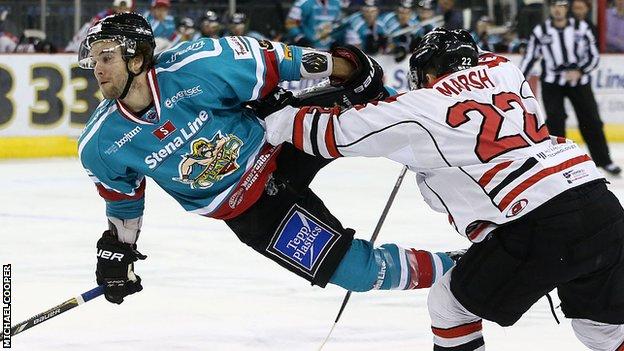 Belfast Giants were beaten in sudden death penalty shots by Cardiff Devils after the game finished 1-1 following regulation and overtime.

Devils forward Jake Morrisette scored twice in the shootout while Dustin Whitecotton netted for the Giants.

Despite the loss, the point the Giants gained increased their lead at the top of the Elite League to two points.

The visitors took the lead at 5:55 following a poor attempted clearance from their own defensive zone by the Giants.

Piggott was afforded too much time and he rifled home a one-timer from the left circle. The Giants weren't behind for long.

At 8:09, with the teams skating four-on-four, Whitecotton stole the puck at centre ice, raced into the Devils zone and timed the pass perfectly for Shields to tie the score at 1-1.

The second period saw the Devils try to impose themselves physically but Andrew Conboy was given a match penalty for excessive roughness while Brad Plumton received a total of 17 minutes for fighting and instigating.

Despite a five-minute powerplay, two of which were with a two-man advantage, the home team couldn't score and the game went into the third period still tied.

An effort from Chris Higgins for the Giants was ruled out with the referee judging the net was off its moorings before the puck crossed the line.

Both sides had powerplay chances to end the the game before the sixty minutes were up and then again in the five-minute overtime period but in the end the match went to penalties and Devils netminder Dan LaCosta made three big saves to steer his side to victory.

The Giants iced without the suspended Adam Keefe and Jeffrey Szwez although both players will be back in the line-up for the second game of the weekend doubleheader between the sides at the Odyssey on Sunday afternoon (face-off 16:00 GMT).