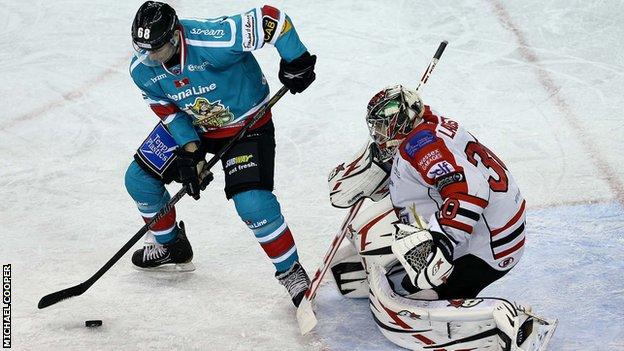 Belfast Giants defeated Cardiff Devils 2-1 on Sunday to secure three points from a possible four in the Odyssey double-header against the Welsh team.

The hosts were beaten by the Devils in a penalty shoot-out on Saturday night but gained revenge with victory in another close encounter.

Jeff Szwez put the league leaders ahead early in the second period before Max Birbraer levelled for Cardiff.

Colin Shields won it with a goal five minutes into the third period.

The Giants scored the opener at 24:51 on the powerplay with Szwez netting his 10th goal of the season.

Cardiff equalised just 19 seconds after the start of the third period with Birbraer scoring as another powerplay ran out.

The Giants restored their advantage at 44:08 when Shield hammered home a rebound after Jeff Mason's shot was blocked by netminder Daniel La Costa.

Giants netminder Stephen Murphy was again in top form he kept the Devils out for the remainder of the game.