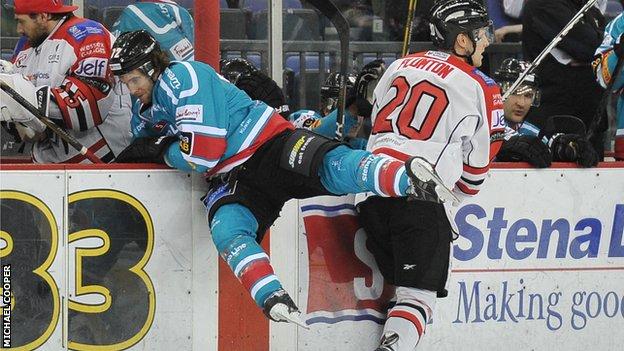 The Belfast Giants beat the Cardiff Devils 7-2 in their Elite League game at the Odyssey to extend their lead at the top of the table to 13 points.

Four second period goals for Paul Adey's side broke open a 1-1 game and they went on to win comfortably, their 10th win from their last 11 starts.

Luke Piggott and Tomas Kurka got on the scoresheet for the visitors.

Shields opened the scoring at 13:15 when he redirected the shot of Szwez past Devils netminder Phil Cook but Piggott's powerplay marker made it 1-1 at the end of the first period.

Sandrock's big blast direct from an Evan Cheverie face-off win at 26:28 made it 2-1 but Giants netminder Stephen Murphy had to make some big stops before his side eventually seized control.

Szwez got the third at 32:03 and just over two minutes later Shields one-timer made it 4-1.

Lloyd tapped home from close range at 38:39 to close out a very solid second period's work.

Szwez got his second of the game and the Giants' sixth early in the final period, a goal that forced the Devils to change goalies with Joe Myers replacing Cook.

Kurka notched a consolation shortly after for the Devils but Higgins rounded off the scoring when he finished an excellent shift by scoring while flat on his belly.

The two sides will meet again on Sunday in Cardiff.

The Giants are 13 points clear of both Dundee Stars and Sheffield Steelers, who now share second place.