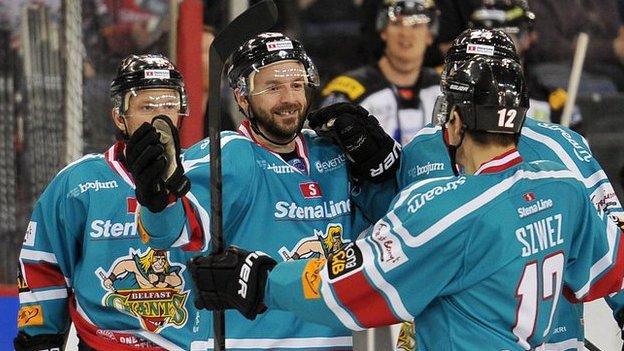 Belfast Giants are now an amazing 17 points clear in the Elite League after Sunday's thumping 7-2 away win over Edinburgh Capitals.

The Giants blitzed the Scottish side by hitting six goals in the first period at Murrayfield Ice Rink.

Colin Shields notched a hat-trick in the opening 14 minutes of action with Dustin Whitecotton (two) and Jeff Mason also on target in the first period.

Whitecotton completed his hat-trick with a final-period strike.

Belfast were already four goals to the good when Curtis Leinweber opened Edinburgh's account in the 13th minute.

Jade Portwood scored the only goal in the second period but the game was long beyond Edinburgh by that stage.

With Dundee Stars losing 5-6 at home to Sheffield Steelers on Sunday night, the Giants extend their league advantage to 17 points.

Sheffield are now level with Dundee on 41 points with Braehead also move to the same total after their 3-0 win over Hull on Sunday.

Belfast's win in Edinburgh completed a successful weekend for Paul Adey's side after Saturday's 3-1 victory in Sheffield.