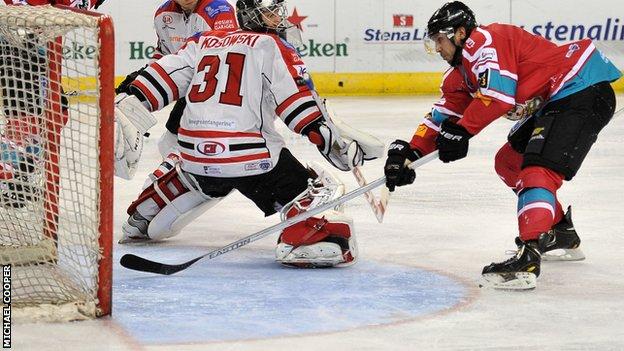 Belfast Giants look to have guaranteed themselves a place in the Challenge Cup final after hammering Cardiff 7-1 in Tuesday night's semi-final first leg.

Goals from Evan Cheverie and Kevin Saurette put Belfast 2-0 up before Andrew Lord replied before the end of the first period at the Odyssey Arena.

The second leg will take place next Wednesday in Cardiff.

However, Belfast's place in the decider appears a formality after they romped to a seventh win in eight meetings with the Devils this season.

Outstanding Elite League form has earned the Giants a commanding 17-point lead at the top of the table.

With the League title seemingly already in the bag, the Challenge Cup decider should offer the Giants the opportunity of completing a double with the possibility of further silverware in the play-offs at the end of the season.