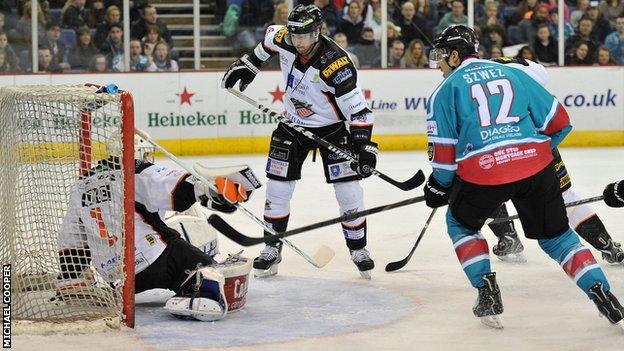 Belfast Giants increased their Elite League lead to 17 points as they earned a 4-2 win in the first of this weekend's back-to-back clashes with Sheffield at the Odyssey Arena.

Sheffield remain Belfast's nearest challengers in the table after Saturday's games and the sides meet again in Belfast on Sunday (16:00 GMT).

Szwez's two opening goals in the first period were split by a Jonathan Phillips reply as the sides battled in front of 5,532 spectators at the Odyssey, the biggest attendance of the current campaign.

After a goalless second period, Keefe's increased Belfast's lead eight minutes into the final period and Szwez completed his hat-trick three minutes later to end any prospect of a Steelers fightback.

Dowd scored Sheffield's second goal with nine minutes left but Belfast were never in danger of being caught.