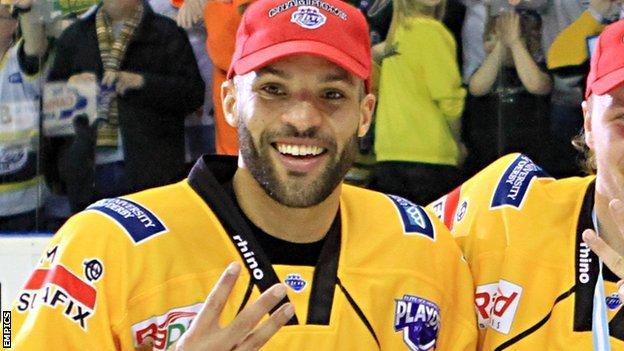 Nottingham Panthers captain David Clarke says his side still have work to do after beating Sheffield Steelers 5-3 in the Challenge Cup semi-final first leg.

He told BBC Radio Nottingham: "We're not going to get ahead of ourselves, 60 minutes is a long time.

"It's a two-goal cushion. It puts the ball in our court and allows us to dictate the return game."

It was a surprise they [Sheffield] were forcing that hard, with three more periods still to go

Steelers equalised three times but eventually succumbed to a second home loss to Nottingham in the space of five days.

Panthers have won four successive Challenge Cups and captain Clarke is hoping that home advantage in the second leg will help his team finish the job.

"With the terrific support that we've had at home this year, we've put ourselves in a great position," he said.

"Leigh Salters has made a delightful pass to set up the fifth goal," Clarke said. "It was nice to see him make a play like that, for sure.

"It was a surprise they [Sheffield] were forcing that hard, with three more periods still to go.

"We were playing relatively passively but they jumped and forced a lot and it turned into a three-on-one for us."

Belfast Giants are already through to the final after beating Cardiff Devils 10-4 on aggregate.

Nottingham meet league leaders Belfast for a double-header this weekend, before the return leg against Sheffield on Tuesday.

"There's no chance of us taking it easy ahead of the second semi-final," Clarke insisted.

"Belfast have been the successful team this year but that's our championship still and we'll be doing our upmost to take two wins from the weekend."