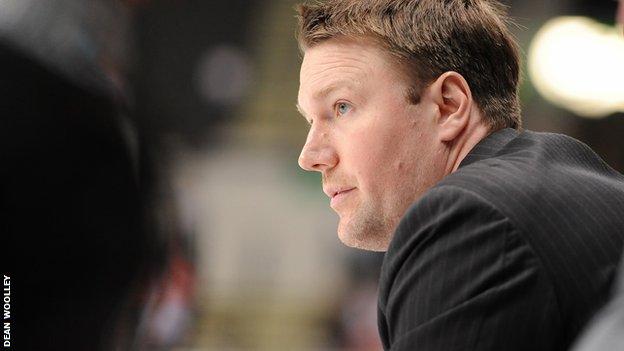 Sheffield Steelers have sacked coach Doug Christiansen after less than a year in charge.

Christiansen, 36, who also coaches the Great Britain side, left Belfast Giants to take over at Sheffield in April.

The American leaves the Steelers in third position in the Elite League and in the semi-final of the Challenge Cup, in which they trail Nottingham Panthers 5-3 from Wednesday's first leg.

It just hasn't worked out and I have not been happy with performances for some time. We are in a results-driven business.

Captain Steve Goertzen has been placed in caretaker charge of the first team.

Christiansen learned his fate at a meeting with Steelers owner Tony Smith.

His dismissal follows Tuesday's departure of assistant coach Mark LeFebvre to take over as head coach of Coventry Blaze.

Smith told BBC Radio Sheffield: "It's not a decision I've taken lightly because I sought Doug for this season.

"It just hasn't worked out and I have not been happy with performances for some time. We are in a results-driven business.

"I think the team had lost their identity a bit this year and nobody would have expected that. I have to hold up my hands and say 'I made the wrong choice'.

"I'm sure we won't have a shortage of applications for the job but we have to find the right person now."