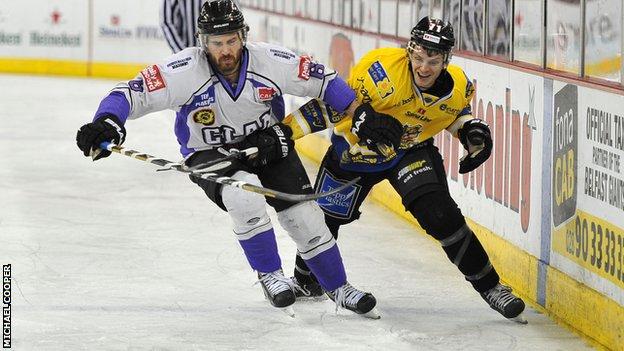 The Belfast Giants recovered from three goals down to beat Braehead Clan 4-3 in overtime in Sunday's Elite League game at the Odyssey Arena.

Two goals from Joel Champagne and one from Ash Goldie put the visitors 3-0 ahead but Calvin Elfring responded before the end of the second period.

Craig Peacock and Elfring were on target in the third to level.

The Giants had suffered their first defeat in regulation time since 3 December when they lost 6-2 to the Flyers.

The Elite League champions were level at 2-2 after the first period, with Mason and Darryl Lloyd getting on the scoresheet.

Ned Lukacevic and Derek Roehl were on target for the hosts.

Matt Nickerson and Bobby Chaumont scored in the second period and Danny Stewart and Tim Hartung in the third.